Arctic warming 4 times faster than the rest of the world, study shows - ednews.net

Arctic warming 4 times faster than the rest of the world, study shows

Scientists have known the Arctic is warming faster than climate models show, but a new study just put into context how much worse the problem is.
It’s long been reported that the Arctic is warming twice as fast as the rest of the world. The researchers behind a Finnish Meteorological Institute study found the Arctic is heating four times faster than other parts of Earth.
The escalation of temperature rise in the Arctic is known as Arctic amplification, explains Mika Rantanen, a researcher at the Finnish Meteorological Institute and the lead author of the study published Thursday. Since the 1960s the globe has warmed by about 1 degree, and the Arctic has warmed by more than three degrees.
“Temperatures are rising faster in the Arctic region than globally,” Rantanen said. “One of the main reasons for Arctic amplification is the sea ice and snow loss, for example, because the open water surfaces and open land surfaces, they are darker, they absorb more solar radiation.”
Arctic amplification has been documented through weather station data as far back as the 1920s, so that is not news. But the Finnish Meteorological Institute study used publicly available data to quantify just how bad it is compared to the rest of the planet. 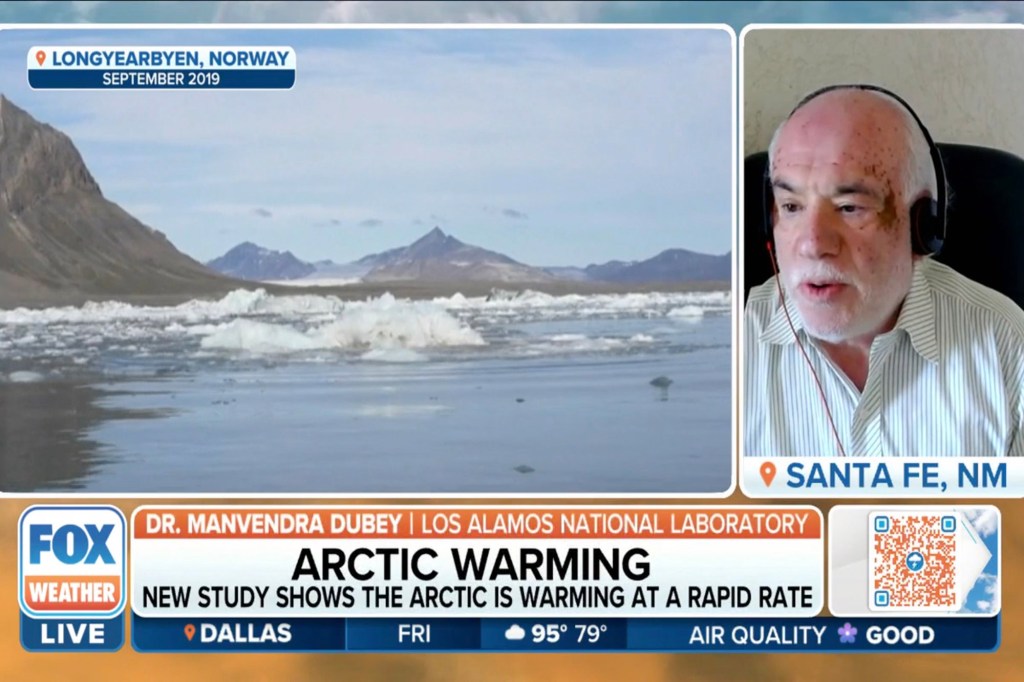 How fast is the Arctic actually warming?
Using satellite observations and data collected in the Arctic Circle from 1979 to 2021, compared with climate model data, the research team found the Arctic is warming not twice as fast but four times quicker than our globe as a whole.
Rantanen said a summer 2020 heat wave in the Arctic was partially an inspiration for the peer-reviewed study.
“We were frustrated about the discrepancy after saying ‘twice as fast as the globe as a whole,” Rantanen said. “When we look at the data, and it’s actually four times faster and frustrated of this discrepancy, we decided that this is something which needs to be updated to the current day.”
According to their study, future climate models are not currently getting the amplification ratio correctly.
“Most of them simulate lower amplification than what is observed,” he said. “It means that the Arctic is perhaps more sensitive to global warming than previously thought.”
What needs further research is what role internal climate variation from ocean circulation or atmospheric changes play in Arctic amplification.
Another study by the Los Alamos National Laboratory published in Geophysical Research Letters in July also rang the alarm about Arctic warming happening four times faster than the rest of the world.
And here’s the kicker: Doubling the amplification from two to four wasn’t a big surprise to the scientific community. Climate scientists do hope it’s a wake-up call for the public.
John Walsh, a climate scientist with the University of Alaska Fairbanks International Arctic Research Center, said the recent studies were able to put an overall picture together to pin down a number based on the Arctic Circle.
“That’s where I think the study is a step forward,” Walsh said.
Defining the Arctic
Narrowing down where in the Arctic to include in the study was also part of the challenge of quantifying the amplification.
“You wouldn’t believe how many hours scientists spend trying to decide what the boundaries of the Arctic are,” Walsh said.
The Arctic Circle at the 66-degree latitude line is a natural boundary, but Walsh said the Arctic could also be defined as the region north of 60 degrees. That includes places like Fairbanks and Anchorage, Alaska, Oslo, Norway, Stockholm, Sweden and Helsinki, Finland.
Meanwhile, Walsh said, other studies include areas with drainage basins that flush fresh water into the Arctic Ocean, including the McKenzie River in Canada and several Russian rivers south of 60 degrees.
The study’s lead author said who or what is included in the Arctic “can vary depending on who you ask.”
No matter how you define the Arctic, weather stations have well documented the warming trend.
In the 1920s and 1930s, stations documented a period of Arctic warming greater than what was happening in mid-latitudes, followed by a cooling period for a few decades.
“Since the 1970s, as this recent study shows, the Arctic warming has really taken off. It’s been much more rapid than the global warming,” Walsh said. “We’re seeing these ups and downs and temperature swings that are just greater in the Arctic than elsewhere.”
Walsh said there had been some scientific quibbling over the time period used in the Finnish study because it started in 1979 when the period of intense warming began. However, the researchers accounted for that and modeled different outcomes if they had started earlier or later.
Even with a different start date, the data still would have produced a number higher than two times the warming found elsewhere in the world.
“The message is similar, no matter how you slice it: the Arctic is warming faster than the rest of the world,” Walsh said.