Unknown fighter jets tried to attack the Russian air base in Syria
Read: 899 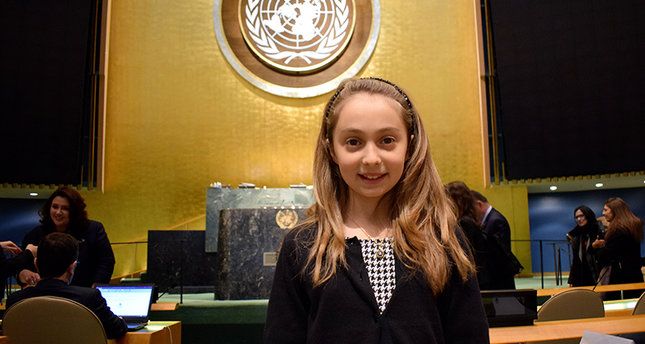 Talya Özdemir, a 10-year-old Turkish girl became the youngest person to address the United Nations General Assembly on the momentous occasion of the International Day of Women and Girls in Science.

Speaking at the panel titled 'Gender, Science and Sustainable Development: The Impact of Media,' Özdemir received a standing ovation for her speech "Girls for Girls in Science".

"I came to share my thoughts with you on this very important day, which encourages girls like me to choose to become scientists, honors women in science and contributes to the development of the world," she said in her opening remarks.

Özdemir stated that although the UN has many internationally important days on a range of issues from science and gender equality to social justice, she and her friends have little knowledge of these days and emphasized that it was the responsibility of governments and the UN to raise awareness about these issues.

She called on the UN and local authorities to visit schools to talk about environmental issues, science, poverty, equality, climate change and renewable energy.

Stating that it was not possible for the UN to reach its Sustainable Development Goals without scientific developments, Özdemir said that women's and girls' contribution was crucial in that sense.

Little Talya also touched upon the issue of refugee women and girls, saying that among them there were many scientists and urged everyone to help them pursue their careers.

Speaking to reporters after the panel, Özdemir said that she was proud of representing her country, Turkey, and all girls in her country at the UN General Assembly.

She said that there were many women working as doctors, engineers and teachers in Turkey but that women's achievements in Turkey or other countries were never really heard of and were not talked about. She said that the media should cover more news about women in science and schools should give lessons about successful female scientists.

Özdemir also asked Peter Thomson, President of the UN General Assembly to be the first person to sign the new campaign she launched "Girls4GirlsinScience" to promote the efforts of girls in science working on sustainable development through education.