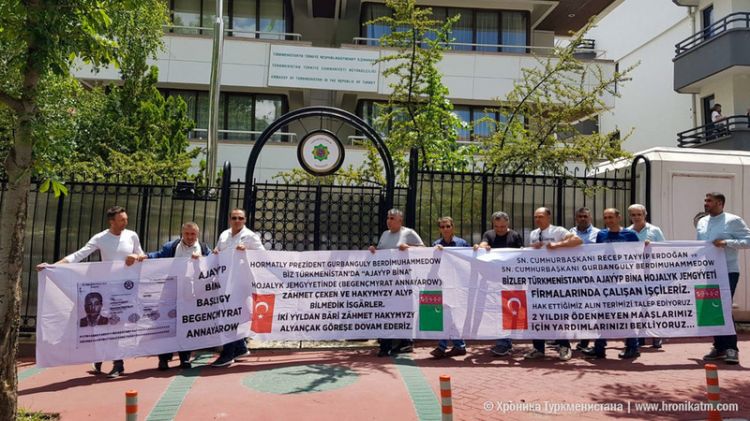 Turkish workers organized a new protest action in front of the Embassy of Turkmenistan 12 July at 10.00 a.m. local time with a request to pay off salary arrears, Chronicles of Turkmenistan reported.

25 construction workers, who were employed in various construction sites in Turkmenistan, have been unable to receive salaries from Turkmenistan-based company the Ajaýyp bina for over three years, AkiPress writes.

This is not the first protest action organized by construction workers, the previous protest action had been held in front of the Embassy in March 2019. However, the protesters were told that they needed a written request to organize an assembly, after which the law enforcement officers were called in to disperse the protesters.

On 5 February 2018, the meeting between the workers and executives of «Ajaýyp bina» was held and the debt acknowledgement document was signed. At that time the Turkish company owed $332 thousand to 25 Turkish workers in wage arrears. At that time they had been paid only $25 thousand, in September 2018 – $30 more thousand, in November – $20 thousand and in February 2019 – $10 thousand. As of today the debt amounts to $248 thousand.