"Lieutenant-General Mayis Barkhudarov keeps families of martyrs in the region under the care of the army - Umud Mirzayev (PHOTOS) | Eurasia Diary - ednews.net 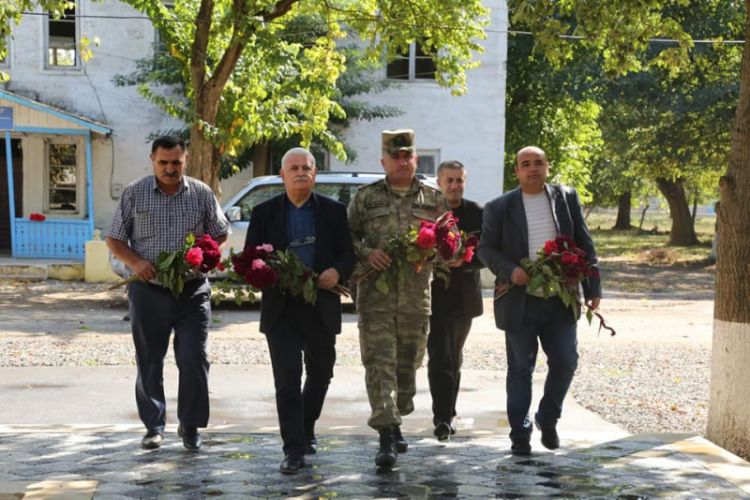 President of the International Eurasia Press Fund (IEPF) Umud Mirzayev had a visit in regions.
Eurasia Diary reports that the IEPF president paid a special visit to families of martyrs living in Beylagan and Fuzuli regions.
"The Beylagan Army Corps is doing a great job in perpetuating the memory of our martyrs. I have seen it again these days," the IEPF president Umud Mirzayev said.
U.Mirzayev was in the park in Shahsevan village of Beylagan district, where the grand statue of Azerbaijani son, the hero of the Second World War, twice the hero of the Soviet Union, General Hazi Aslanov was erected.
The IEPF President then visited the Heroes village of Beylagan, which is one of the most martyred villages in the region. A memorial complex dedicated to the memory of our martyrs was also refurbished by our military.
After the viit in Beylagan region, U.Mirzayev continued his trip in the village of Ahmadbayli of Fuzuli region, where he met with Svetlana khanum (miss) the mother of the martyr of Leletepe Major Elnur Aliyev.
"Svetlana khanum settled in Ahmedbeyli after they were evicted from the occupied village of Dedali. She wants to return to her native and warm home land. She also says she is ready to join the army." he said.
U.Mirzayev expressed his admiration for the courage and bravery of the martyrs:
"While I met these brave ladies who gave martyrs for this land, I was able to see how great the mothers they are and how hard they have been. I also saw that the commander of the army corps, Lieutenant-General Mayis Barkhudarov tirelessly keeps families of martyrs in the region under the care of the army. It made us to believe once agan that our big victories are just through the unity of our people and the army! "