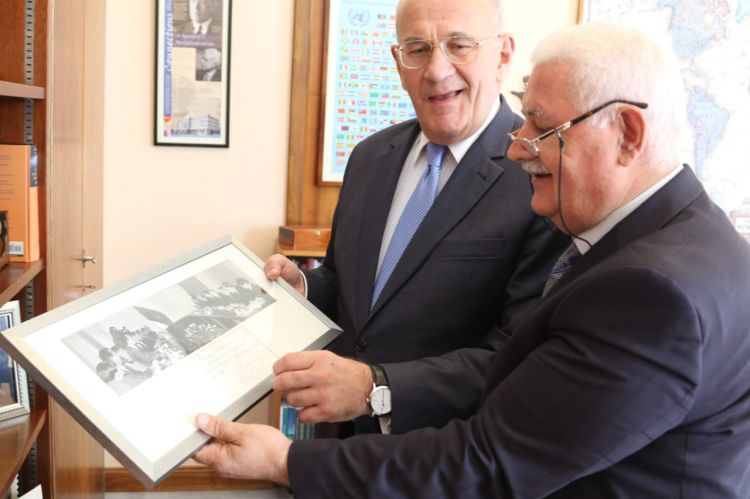 “As a representative of the International Eurasia Press Fund, my colleagues and I often have to travel abroad and take part in important events, including those, organized at the headquarters of the United Nations.

During my last trip to Geneva in September 2019, to attend the 42nd regular session of the UN Human Rights Council, at which our organization’s statement on the rights of refugees and internally displaced persons was presented, we had several important meetings with experts and representatives of the UN structures. Our organization successfully held a side event "Human Rights in the Middle East" with the participation of representatives of many international organizations. I can confidently say - that trip was very fruitful.

I would like to mention one meeting in particular, with David Chikvaidze, Chef de Cabinet of the Director-General of the United Nations Office at Geneva (UNOG). Originally from Tbilisi, David Chikvaidze is a graduate of the faculty of international relations at MGIMO and has been in the diplomatic, government and international civil service for close to thirty-five years. Since 1993, D. Chikvaidze has worked for the UN, both in New York and in Geneva. He is currently also vice president of the Swiss Foreign Policy Association and of the Diplomatic Club of Geneva, a fellow of the World Academy of Art and Science, member of the international Rotary movement.

Our meeting with David centered on ways we could cooperate and develop relations in the future, in particular with a view to closer integration into the work of the UN.

It was very interesting for me to hear his story about trips to Azerbaijan and a meeting with our National Leader Heydar Aliyev. We talked for a long time about that.

During one of those visits to Azerbaijan, a historic exclusive photo was taken.

Here is what D. Chikvaidze himself told me:

“I first visited Azerbaijan in December 1994, as part of the United Nations delegation to review the country's humanitarian needs. The delegation was received by President Heydar Aliyev, who personally greeted each member and addressed everyone by name! The Father of modern Azerbaijan Heydar Aliyev is was one of the most prominent and impressive political leaders I have ever encountered in my career. He led the country out of its post-Soviet dilapidated and destitute state into the position of one of the more successfully developing former Soviet republics. The work that he started done is brilliantly continued to this day, by his talented son, President Ilham Aliyev. Under his wise, balanced leadership and foresight, Azerbaijan ‘came of age’, becoming an acknowledged leader in the energy, political, strategic spheres in Eurasia and a serious geostrategic player in the world arena.” Shared memories of studying with our President Ilham Aliyev at ‘MGIMO’, and described the moment when he asked his former schoolmate to convey to his father H.Aliyev a request to sign a photograph taken during that first visit.

Honorable Heydar Aliyev signed and even wrote a dedication on the photograph:

“To David Chikvadze with wishes for success in noble work at the UN.” David carefully cut out this text and placed it next to the photo. He keeps this photo and the inscription framed together, in one of the most prominent places in his office. He values them very much and proudly shows to his guests.

Since that first visit in 1994, David has frequently visited Azerbaijan, taking part in forums and conferences of an international format. For me, this is all very important. I felt how a person who knows knew our National Leader, treats his memory with deep respect, sympathy and appreciation for Azerbaijan.

We continue to maintain relations with David and recently, I turned to him with a request to share his recollections with the public to which he gladly agreed.

That trip to Geneva, like many others, became special for me.

In general, all these travels and meetings give us the opportunity to bring up for discussion the most pressing issues for civil society and to form a good environment. We often find friends, relatives, and like-minded people, which I am very happy about. And this last meeting with David Chikvaidze is a case in point.