Trump claims Russia created hypersonic missile after receiving info about it from US
Read: 365 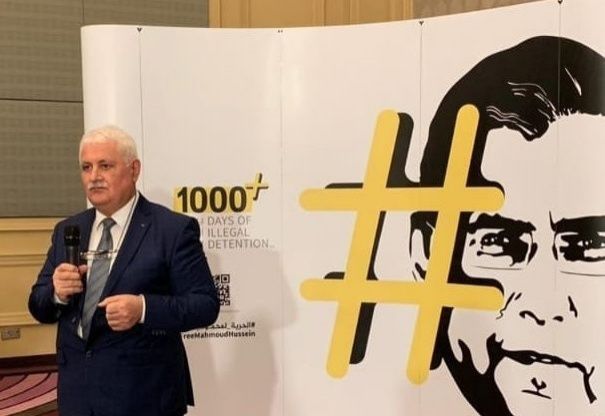 President of the International Eurasia Press Fund, Umud Mirzayev, attended the symposium titled: “Challenges of Media Freedom: Confronting Impunity, Rule of Law and Denial of Access to Information”, organized by the Al Jazeera Centre for Public Liberties & Human Rights  December 8-9, in Doha, Qatar. According to Eurasia Diary, speaking to a wide audience on the panel «Building Partnership and solidarity between Media Organizations and International Organization: opportunities and perspectives» U. Mirzayev raised the issue of the need to develop integration of media and international organizations, but at a fair basis and an unbiased approach to all countries. On the example of the Armenia-Azerbaijan Nagorno-Karabakh conflict, U. Mirzayev said that the world media and international organizations should develop a unified approach condemning acts of aggression committed against Azerbaijan, including the murder of journalists.

Eurasia Diary presents the full text of the speech:

Now, more than ever, there is a strong need for media organizations and international organizations to come together in partnership to support the protection of press freedom and fundamental human rights.
The journalists constantly risk their lives in search of truth, despite the existing declarations, resolutions and documents aimed at protecting of their rights. The international organizations that have to support countries development also face oppression, if not similar challenges as media organization.
We saw this at the end of the 20th century, the collapse of the Soviet Union, was accompanied by numerous ethnic conflicts in the Caucasus, the Baltic countries, Chechnya, Central Asia and several post-Soviet countries. It was mostly felt in Karabakh. During the Armenia-Azerbaijan Nagorno-Karabakh conflict, during the period of the aggressive policy of Armenia against Azerbaijan, and the occupation of 20% of the territory of our country, 7 foreign and local journalists were killed. The organizers of these crimes faced no consequences and even took the leading positions. Today we also see journalists and even humanitarian workers targeted in places such as Syria, Pakistan, Mexico, Philippines, Afghanistan, in Africa, and other countries.
Being International Eurasia Press Fund we believe that the development of partnerships and solidarity between media, civil society organizations and international organizations will help to protect media workers and freedom of information. I know this first hand because this is the International Eurasia Press Fund model, which I, together with some of foreign media colleagues, used 30 years ago in establishing the organization.
Since the beginning of the 90s, we have organized visits of more than 100 foreign journalists to hot spots. This practice continues today. Only this year, front-line regions were visited by journalists from Qatar, US, Israel, Uzbekistan, Pakistan, Ukraine and several other countries. Not once we came under fire. IEPF has good experience in providing first aid, developing safety rules, technical standard operating procedures and other related issues. We continuously organize and participate in various campaigns for journalists’ protection. One of them was the one organized by Al Jazeera in November 2017.
Being member of the UN agencies, ECOSOC, International Peace Bureau, and International Press Institute, with whose representative I have the honor to participate in this panel today, we always approach all these issues with responsibility.
We had a chance to contribute to the creation of national committees of the International Press Institute in Azerbaijan, Georgia, Kazakhstan and Kyrgyzstan. However, the process did not advance, because there was no acceptable support from international structures.
There are different factors that negatively affect the media cooperation with international organizations:
- Unequal approach to countries
- Public distrust in certain organizations
- Absence of accuracy, unbiased and transparency issues
Some countries have problems with media development and the protection of the rights of journalists. However, sometimes we see how international structures even condemn the countries that are trying to eliminate these problems.
If international organizations cannot form a fair and unbiased approach to each country, this leads to certain problems.
In a case with Armenia-Azerbaijan conflict and the occupation by Armenia of Nagorno-Karabakh and 7 surrounded regions, the way international organizations approach has made public disappointed. The lack of a unified approach by the world media and international organizations to condemn acts of aggression against Azerbaijan, including the killing of journalists, undermine confidence in the effectiveness of such cooperation.
Dear colleagues and friends!
I take this opportunity to participate in such an event in which representatives of important international structures are also present, to encourage all participants to join forces and work together to raise awareness of the need to manage cooperation between the international organizations and Media organizations in a fair and unbiased approach to all countries.
Thanks for your attention!"
Note that the symposium was organized on the occasion of the celebration of International Human Rights Day. Representatives from Al Jazeera Media Network, Division of Freedom of Expression and Media Development-UNESCO, International Press Institute (IPI), Committee to Protect Journalists, Community Media Network; Front Line Defender, UN Special Rapporteur on extrajudicial, and many others were among the participants. The symposium aims at strengthening press freedom, guaranteeing the safety of journalists and protecting them from the dangers that they may face due to their professional work. The symposium made an effort to ensure the launch of an effective dialogue, overseen by the Al-Jazeera Center for Public Freedoms and Human Rights, to discuss the development of partnership and solidarity between stakeholders and countries. It monitored and evaluated the various protection efforts of the United Nations and relevant international organizations. On the other hand, the symposium contributed to highlighting the initiative of the Universal Declaration for the Protection of Journalists as the cornerstone of establishing an integrated international system that promotes freedom of information and the protection of journalists.