Armenia-Azerbaijan conflict must be resolved on the basis of the territorial integrity of Azerbaijan - President Ilham Aliyev
Read: 246 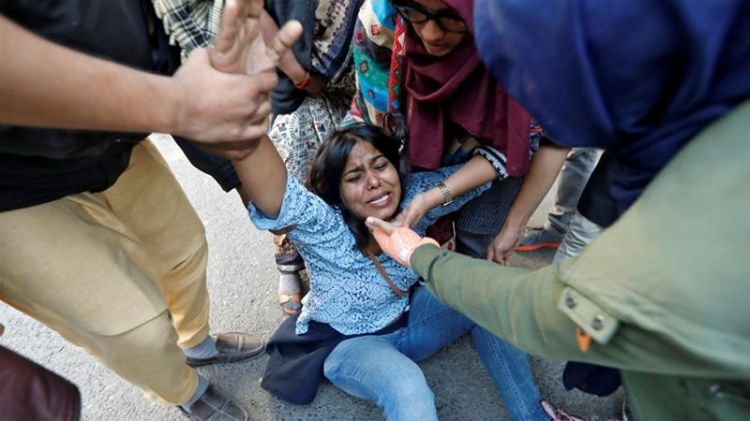 After Police entered into girls Hostels of Jamia Millia Islamia in Delhi and at Aligarh Muslim University in Uttar Pradesh on Sunday evening, several female students are missing and nobody knows who have picked them up?

On Sunday, protests were controlled with force by police at Jamia Millia Islamia in Delhi and at the Aligarh Muslim University in Uttar Pradesh as student were chanting slogans against Modi government and Police were resorting tear gas and thrashing male and female students in a brutal reaction. Sunday was a charged-day in Delhi where Police entered Jamia Millia Islamia Delhi to arrest students and faced serious resistance and then Police entered Girls Hostel and picked female students to undisclosed place.

According to hospitals sources, 31 students were brought to hospitals with wound of gunshot and 11 were in critical condition.

How to rescue a victim during a #lynching incident.
Real life demo by women students of #Jamia

Chief Proctor Waseem Ahmed Khan of Jamia Millia Islamia Delhi while talking to journalists stated that the Delhi Police entered the campus forcibly without any permission and beat up staff members and students who were forced to leave the campus.

Condemning the police action, university vice chancellor Najma Akhtar said students who were inside the library which was allegedly surrounded by the police have been taken out and are safe.

The university had on Saturday cancelled exams and announced vacation till January 5 in view of the tension, while the Aligarh Muslim University too was closed till January 5.

AMU Proctor Prof Afifullah Khan said some security personnel have been injured in brick-batting near the gate. Police said the student broke down the police cordon. Police have sealed all gates to the campus.

“What happened yesterday at both AMU and JaMia needs to be not just condemned but protested. A least three precious students were killed and bodies were taken away by police. The JaMia area remains under siege. Over 200 students are missing. It’s a disgusting horrid and frightening situation but the courage of women and men students is inspiring”, said Hussna Raheem, a student leader from JNU while talking to local television. She stated that JUN would also join protests if government would not stop action against students.

Watch | "They entered our hostels... Is this democracy? What wrong did we do? We were simply protesting": Student recounts police crackdown at #JamiaMillia university yesterday. #CitizenshipAct #DelhiProtests #Jamia pic.twitter.com/VgZIu09SnA

Delhi Police defended the police's action. "About 4,000 people were protesting and police did what they did to disperse them when the crowd burned buses," said Chinmoy Biswal, a senior police officer in the area. "If it had been a peaceful mob, it would have been dispersed peacefully."

He added that police entered the campus to maintain order and that six officers were wounded in the clashes.