The United Nations warned some 30,000 of malnourished children are at serious risk of death in Ethiopia's Tigray region. 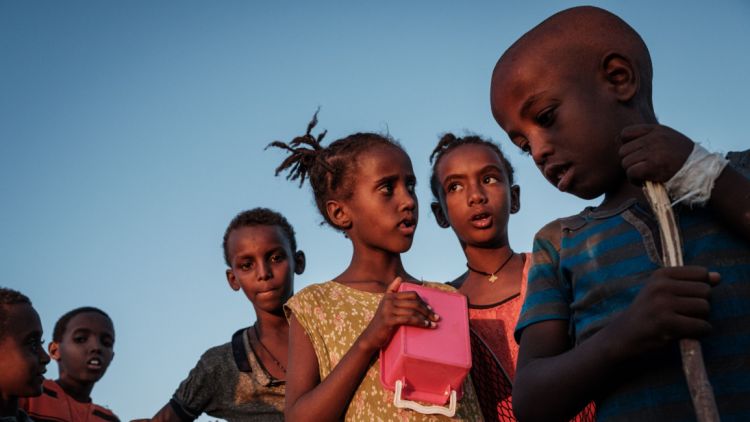 Tens of thousands of malnourished children risk dying in hard-to-reach areas of Ethiopia's conflict-wracked Tigray region, now hit by famine, the United Nations said on Friday.
"Without humanitarian access to scale up our response, an estimated 30,000-plus severely malnourished children in those highly inaccessible areas are at high risk of death," UNICEF spokesman James Elder told reporters in Geneva.
He said the UN children's agency was working with other organisations to help address the crisis, but was lacking access to large parts of the region.
"An estimated 33,000 severely malnourished children in currently inaccessible areas in Tigray are at high risk of death," he said.
"The world cannot permit that to happen."
His comments came a day after the UN said some 350,000 people in Tigray were facing famine, while two million more people were just a step away from those extreme conditions.
Worst in a decade
"There is famine now in Tigray," UN humanitarian chief Mark Lowcock said on Thursday, warning that "every expert you speak to will tell you this is going to get a lot worse".
Lowcock said fresh data showed the number of people classified as being in famine conditions was "higher than anywhere in the world at any moment since a quarter of a million Somalis lost their lives in 2011".
The UN has said that more than 90 percent of the more than five million people in the Tigray region need emergency food aid, and has urgently appealed for more than $200 million to scale up its response.
Ethiopian Prime Minister Abiy Ahmed, winner of the 2019 Nobel Peace Prize, sent troops into the northern region in November to detain and disarm leaders of the Tigray People's Liberation Front, the region's former ruling party.