UNICEF Representative in Azerbaijan sent a letter of thanks to IEPF President | Eurasia Diary - ednews.net 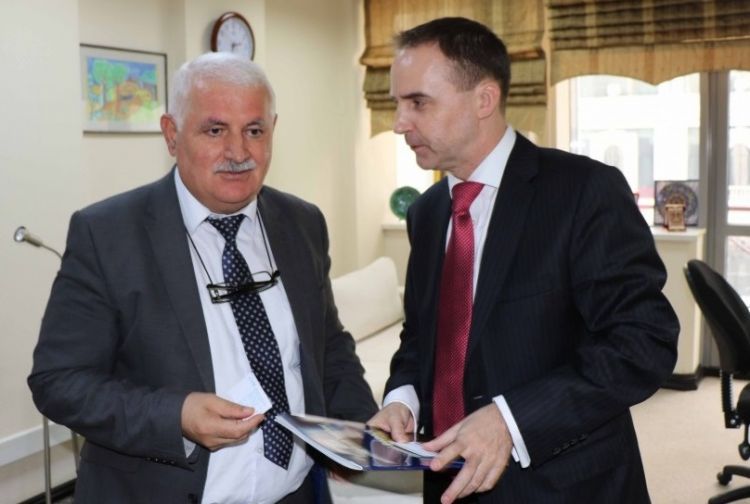 The five-year term of Edward Carward, UNICEF Representative in Azerbaijan, is coming to an end. On this occasion, Edward Carward sent a letter to Umud Mirzayev, the President of the International Eurasian Press Foundation . In the letter, he thanked UNICEF and the IEPF for the excellent cooperation.
Mr. Carwardine, a British citizen, began his career in 1997 as a communications specialist at  UNICEF's Community-Based Donation and Public Relations Foundation. He was previously the head of the Donation and Public Relations Foundation at the social welfare organization that supports vulnerable communities in the north-west of England. Mr. Edward has also worked with UNICEF in India and Madagascar on humanitarian assistance while working for the UNICEF National Committee in the United Kingdom. Mr. Carward was appointed UNICEF Representative in Azerbaijan in October 2016. Prior to that, he served as UNICEF Deputy Director of Communications in New York City. Prior to that, Mr. Carward served as Communications Director at the UNICEF Office in Indonesia in 2009 and at the UNICEF Office in Kabul in 2004. In 2002, he supported the Assembly's Special Session on Children while preparing the UN General Assembly's Global Humanitarian Action Report. He holds a bachelor's degree in English language and literature from the University of Liverpool.
Eurasia Diary presents the text of the letter:

After five years serving as UNICEF Representative to the Republic of Azerbaijan I will shortly bo mowing to a new position within the organization, and so I would like to take this opportunity to thank you for the excellent collaboration between our two offices throughout the time that I have had the honour to work in Azerbaijan.

It has been my great privilege to contribute in some small way to the lives and futures of children and young people in thisa country. While I know there is more that I could have done, and issues that I was not able to pursue as vigorously as I would have liked, I hope that through our work together progress has been made for many children over the last few years.

I am confident that children and young people across Azerbaijan will face a bright future, filled with opportunity, and I will cherish the moments that I spent here, and will always be proud of what we have achieved throught our cooperation/

Although my official duites will cease next week, I will remains in Azerbaijan until the end of July to enjoy my last moments in the country that has been my home since 2016, and my successor should be in place in early August.

I thank you again for your kindness and your support throughout my tenure and convey my warnest best wishes to you and your colleagues.