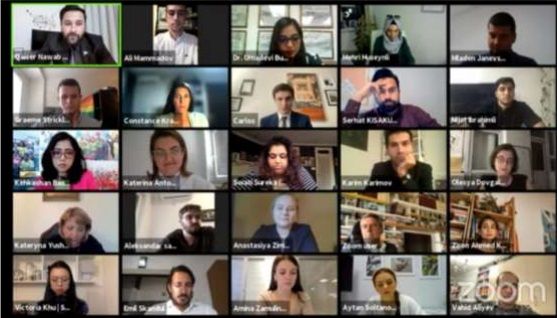 Engr. Qaiser Nawab, a Pakistani youth leader spoke on “The Role of Young Leaders and Change-makers in Much Needed Reforms” at the “Young Leaders Forum 2021” organized by the “Nizami Ganjivi International Center”, Baku Azerbaijan.

He thanked Madam Kateryna Yushchenko, the First Lady of Ukraine (2005-2010) for giving him the floor to speak on the important topic and championing the prestigious forum by moderating it successfully. He extended Birthday wishes in his national language Urdu, to Her Excellency Madam Maria Fernanda Espinosa, President of the 73rd UN General Assembly, Minister of Foreign Affairs of Ecuador 2007, 2017-2018, Minister of National Defense 2012-2014, who along with Rosen Plevneliev, President of Bulgaria 2012-2017 were keynote Speakers.

He extended his appreciations and thanks to the organizers particularly Secretary General of the Nizami Ganjivi International Center Mr. Rovshan Muradov for providing an opportunity to be a part of the “Young Leaders Forum 2021”,

which is "The year of the Nizami Ganjavi" declared by the President of the Republic Of Azerbaijan, His Excellency Ilham Aliyev. Being Young Leader and Change Maker from Pakistan, it’s my pleasure to know about the great poet and

thinker Sheikh Nizami Ganjavi, who has an exceptional place not only in Azerbaijani Literature, but also in world literature.

We all know the famous quote by Mahatma Gandhi, “Be the change you wish to see in the world” and, while it is a great sentiment, we are constantly being made to feel guilty for not doing our part. Youth, through the professions they have chosen, make sacrifices day in and day out to bring much needed reforms however Reforms are the continuous process for development and emancipation of society. Without reforming society, its motion and development is

not possible. Human travel from the oldest period to modern time is a result of all these reforms movements. Presently we are living in the age of rapid reforms ranging from local to global. At the global level, there are multi-level reforms covering almost all aspects of life. Mr. Nawab said He emphasized that the most important reforms of the 21st century are 5Ps, People, Planet, Prosperity, Peace, and Partnerships. These 5 Ps are the driving force behind the idea of sustainable development all around the world. Today these are the major 21st century reform agenda which largely influenced the local reform agenda of all nations around the world.

In September 2019, UNO launched the decade of action for the Sustainable Development Goals to accelerate sustainable solutions to all the world’s greatest challenges, ranging from poverty and gender to climate change, inequality and closing the finance gap. Within six months of the decade’s launch, the emergence of the coronavirus disease (COVID-19) pandemic heralded another great challenge for the world.

The COVID-19 pandemic has had an impact on global reforms agenda and all 17 Sustainable Development Goals, showing that what began as a health crisis has quickly become a human and socioeconomic crisis. The crisis is simultaneously endangering progress on the Goals and making their achievement all the more urgent and necessary. Efforts to recover from the COVID-19 pandemic must go hand in hand with efforts to implement the 2030 Agenda for Sustainable Development and deliver the Goals during the decade of action. Mr. Nawab said According to the most recent World Bank projections, made in June 2020, 100 million people in the world will be pushed back into extreme poverty in the downside scenario and 71 million in the baseline scenario The Asia-Pacific region will suffer a greater impact on poverty as a result of COVID-19 than any other region of the world, with almost half of the projected new poor located in South Asia.

According to UNESCO, at the height of country lockdowns, approximately 1.5 billion children globally were affected by school closures. In the Asia-Pacific region, at least 850 million students were affected and lost almost half of the academic year by September 2020. Moreover, more than 6.7 million additional students in primary and secondary education in the region are at risk of dropping out, with the highest estimated number of 4.2 million dropping out of secondary education.

Finally, Mr. Nawab ended his a speech with a question that we need to think about;. How to achieve the objectives of the global reforms agenda with local and national response and with the greater participation of youth in all this reform process?

The Young Leaders Program (YLP) is designed to identify the most promising young leaders from around the globe. Young people between the age of 18-30 from different backgrounds and professionally active in any field from politics and policymaking, social, humanitarian, economic, environmental, and legal spheres to entrepreneurship, innovations, and science who have the potential to positively impact their communities and the wider world are chosen.

Qaiser Nawab is an award-winning strategic communications expert with nearly 10 years of experience as an advocate for social change working with a Canadian based Communication and Crowdsourcing Company M&C Consulting Inc. Nawab’s desire is to impact as many youths as possible and believes that,

“Live for yourself and you will live in vain.

Live for others and you will live again”.