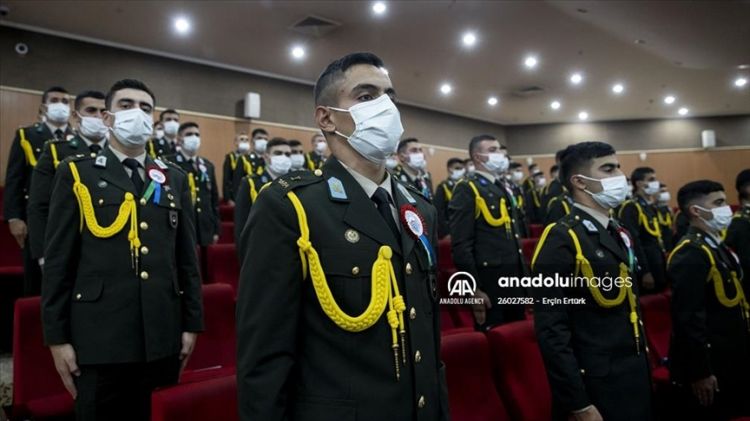 Azerbaijani physicians studying and working in the Turkish capital, mainly military doctors who voluntarily joined the Karabakh war last year to treat wounded soldiers on the frontlines, were remembered Thursday in Ankara.
An event titled Epic of Brotherhood Through the Eyes of Doctors, which was held at the Gulhane Faculty of Medicine at the University of Health Sciences (SBU), recalled the courage and bravery of doctors who on their own will left their studies, work and families behind and joined the second Karabakh war, also known as the Patriotic War, which put an end to Armenia's nearly 30-year occupation of Azerbaijani lands.
Organized jointly by the Azerbaijani Embassy in Turkey, SBU Gulhane Faculty of Medicine and the Azerbaijani Physicians Association in Turkey, the event began with the national anthems of Azerbaijan and Turkey followed by a short film describing the history of the Karabakh area.
The doctors of the Patriotic War were awarded with a plaque at the event, which ended with a concert by a military orchestra.
Rashad Mammadov, Azerbaijan's newly appointed envoy to Ankara, speaking at the event said Azerbaijan's victory in last year's war was an "irreplaceable and much-awaited" date, noting that Nov. 8, 2020 entered into the country's history as Victory Day.
The ambassador reiterated that around 20,000 people were "martyred" during the Karabakh war back in the 1990s, while the second Armenia-Azerbaijan Karabakh war resulted in the "martyrdom" of nearly 3,000 people.
"We were not alone in this war. The Turkish nation raised the Azerbaijani flag once and never brought it down again," he said.
Referring to "one nation, two states," a notion and slogan of Azerbaijan's national leader Heydar Aliyev, the envoy said it was not only words but also support given in tough days.
Mammadov also thanked and hailed Turkey's President Recep Tayyip Erdogan, the Turkish parliament, politicians, the media and the whole nation for their support to Azerbaijan.
"I want to thank all 84 million brothers and sisters in Turkey," he stressed.
He underlined that whole areas liberated from the nearly three-decade-long occupation will be restored and new, modern cities will be built there as promised by Azerbaijani President Ilham Aliyev.
"In this war, not only the sons living in Azerbaijan fought but also the doctors living, studying and working in Turkey left their families, their jobs and immediately joined the war. Their benefit was perhaps greater than a general's benefit," he added.
The envoy also wished Allah's mercy upon the "martyred" 10 Azerbaijani doctors in the recent war and thanked all those physicians who voluntarily rolled up their sleeves and joined the frontlines for the treatment of soldiers.
Victory of supporters of justice
Dr. Cevdet Erdol, head of University of Health Sciences, speaking at the event thanked all those Azerbaijani doctors of the Karabakh war, noting that he is "proud" of all of them.
He said that currently there are over 50 Azerbaijani doctors at Gulhane, adding that a total of 732 officers successfully completed their medical studies at the university.
"Karabakh is Azerbaijan forever," he said, also wishing Allah's mercy upon all those who lost their lives in the conflict.
Ahliman Amiraslanov, head of the Azerbaijan-Turkey Inter-Parliamentary Friendship Group, said the Azerbaijani army achieved victory in the 44-day war thanks to the bravery of its soldiers.
"The whole Turkic world and all the supporters of justice were waiting for the victory," he said.
Amiraslanov highlighted that the Turkish "brothers and sisters contributed a lot to the development of medicine in Azerbaijan.
"Most of the doctors working in the Azerbaijani army have graduated from Gulhane," he said.
'Fight for peace'
Samil Ayrim, a Turkish lawmaker who chairs the Turkey-Azerbaijan Parliamentary Friendship Group, said at the event that Azerbaijan knows well the value of Victory Day as it "paid a price" for that.
Speaking on the 30-year occupation of the Azerbaijani lands by Armenia, Ayrim said they never forgot the "massacres" committed by the Armenian side against the Azerbaijani people.
"Sometimes it is necessary to fight to bring peace," he asserted.
Farid Kasimzade, head of the Azerbaijani Physicians Association, said they started a campaign to recruit the regional volunteer physicians within 24 hours as the war started last year.
"Some 68 volunteer doctors applied to us, and we sent them off to the hospital behind the front in Azerbaijan."
He went on to say that the association had sent surgical instruments and medical supplies periodically to the frontline.
Kasimzade said that a total of 86 military medical personnel were "martyred" during the war.
Liberation of Karabakh
Relations between the former Soviet republics of Armenia and Azerbaijan have been tense since 1991, when the Armenian military occupied Nagorno-Karabakh, also known as Upper Karabakh, a territory internationally recognized as part of Azerbaijan, and seven adjacent regions.
New clashes erupted on Sept. 27 last year, with the Armenian army attacking civilians and Azerbaijani forces and violating several humanitarian cease-fire agreements.
During the 44-day conflict, Azerbaijan liberated several cities and some 300 settlements and villages that were occupied by Armenia for almost 30 years.
Prior to this, about 20% of Azerbaijan’s territory was under illegal occupation.
The fighting ended with a Russian-brokered agreement on Nov. 10, 2020 with the cease-fire seen as a victory for Azerbaijan and a defeat for Armenia.
Two months later, the leaders of Russia, Azerbaijan and Armenia signed a pact to develop economic ties and infrastructure to benefit the entire region. It also included the establishment of a trilateral working group on Karabakh.