"Roots of Peace Vineyard" will grow in Karabakh - VIDEO - ednews.net

"Roots of Peace Vineyard" will grow in Karabakh - VIDEO 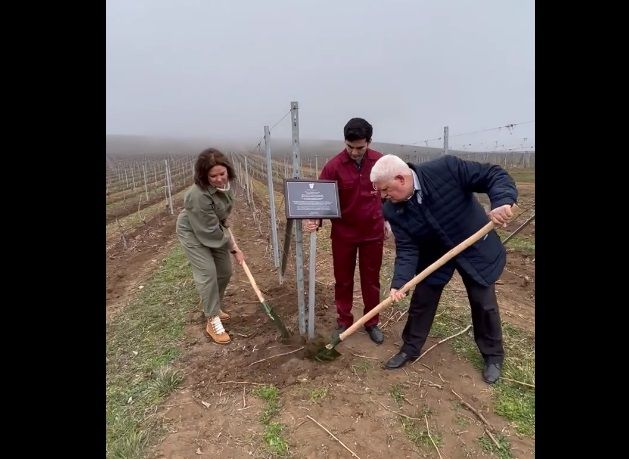 Heidi Kuhn, founder and CEO of Roots of Peace, a humanitarian non-profit organisation, shared a post about her visit to Karabakh on her Facebook.

H.Kuhn commented on the sharing as follows:

Proud to plant a symbolic grapevine on former war-torn lands, as a tribute to our Roots of Peace MINES TO VINES initiative.

As a world, we share the same soil on our one beloved Mother Earth.  When we bomb the land or plant landmines, we only hurt the life source which sustains us worldwide.

Azerbaijan is bordered by the Caspian Sea in east, by Iran in south, by Armenia in west, and Georgia and Russia in the north.

This was a sacred moment, as we literally turned ‘swords to plowshares’—blood into wine, killing fields into vineyards, mines into vines for people of all faiths to thrive.

The grapevine is a symbol of life…

May we turn ‘seeds of destruction’ into ‘seeds of hope’, and remind the world that no one benefits from the perils of war.

Heidi Kun, founder and CEO of Roots of Peace, a humanitarian non-profit organisation, visited Azerbaijan on March 1-5 at the invitation of the International Eurasia Press Fund and with the support of ANAMA. Heidi Kun also signed a memorandum with the IEPF to implement a new initiative.