Over 5M Kazakhs died in first half of 20th century due to Stalin-era oppression, famine-triggering policies 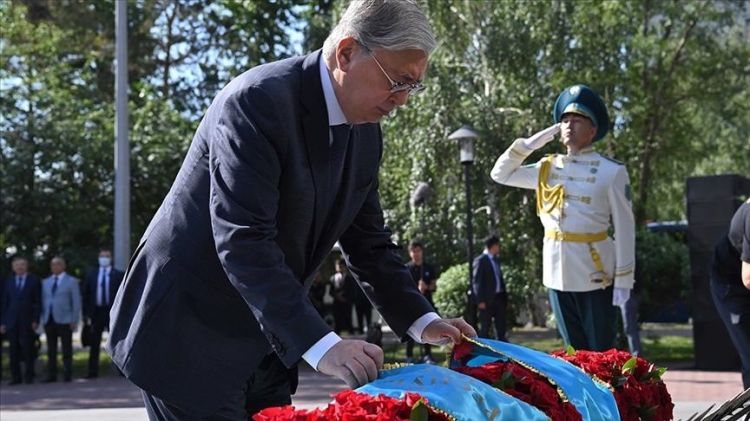 Kazakhstan on Tuesday commemorated over 5 million Kazakhs who died of famine during the Soviet era in the first half of the 20th century.
President Kassym-Jomart Tokayev attended an event in the capital Nur Sultan, paying his respects to the victims in front of a monument symbolizing the famine of 1932-1933.
Tokayev also visited the Hazrat Sultan Mosque in the capital and listened to a recitation of the Quran in memory of those who lost their lives.
Since 1997, May 31 has been observed every year as the Day to Remember the Victims of Political Oppression, Exile and Starvation, including those Kazakhs who died amid political oppression and other policies that resulted in hunger under Soviet leader Joseph Stalin.
In the first half of the 20th century, Bolshevik Filipp Goloshchyokin was brought in to head the second-most expansive country in in the Soviet Union at the behest of Stalin.
Goloshchyokin, who was appointed as the first secretary of the Communist Party of Kazakhstan, began implementing a policy known as the "Little October" social revolution immediately after assuming the post.
Under the policy, the Soviet state seized livestock that a large part of the local population relied upon for sustenance, in a bid to push Kazakhs toward a sedentary lifestyle though what has become known as "collectivization".
The number of cattle in Kazakhstan, which was estimated to be about 45 million before collectivization, fell to 4 million in just a few years, historical data shows. This led to the "Great Famine" of 1930-1933. About 2.5 million of the country's total population of 6 million died during this period.