Henry Van Rens writes about his recent trip to Karabakh - "Terrified to see how soldiers were buried alive" - ednews.net 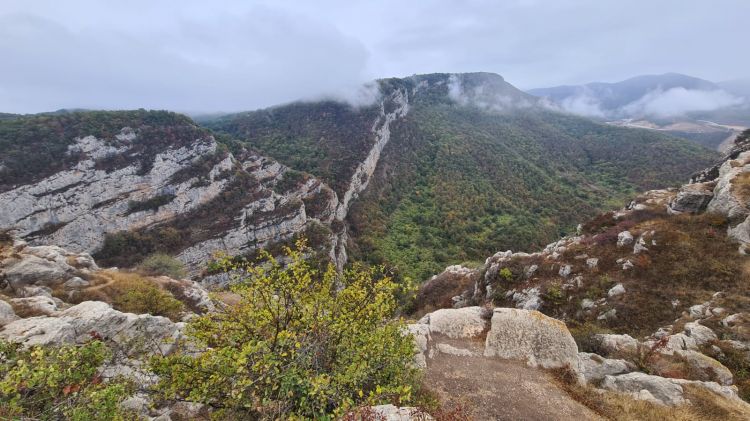 After a special day on October 14, the day on which the 30th anniversary was held in honor of the IEPF organization under the chairmanship of Mr. Umud Mirzayev with many guests from various countries, it was intended that we would like to meet some guests of the IEPF event  would leave for Karabakh in three cars. After I checked in at the Fairmont hotel it was time to get in and leave. Mr. Umud Mirzayev was our organizer and leader for this trip to Şuşa.  So we quickly set off. But that road was already negated by a water main break about fifty kilometers further. And then you get a traffic chaos of yes. Everyone is trying to get ahead. Pushing doesn't help much, but some people using probably the wrong part of their brains.

Me, as a Dutchman think, why are you not staying and drive in your own lane. Then this traffic problem is quickly solved.  But no, that will not happen soon in Azerbaijan. Anyway, after about an hour we arrived at the point where the waterpipe broke, and this area had become a small sea. Fortunately, we were able to drive through the high water with our cars without any problems.  Still handy if you are high on the wheels. Several other road users were less fortunate. They got stuck in the water. So get out and push the car further. They weren't happy about that. Okay quickly we drove to the "border post" of the Karabakh region. Here the passports were checked by the border police on duty. You must have a special permit to visit the Karabakh region. If your name is not listed, you will not be admitted to Karabakh.

You have a moment here to get out. Don't walk too far away from your mode of transport. You will be well looked after, but you can stretch your legs after sitting for a few hours.

And then if you look around it is still astonishing to see what was destroyed by the Armenian occupiers in the 1st Karabakh war and the following 28 years. Not a single building has been spared by the Armenian aggressors. All buildings have been destroyed. For example, let me mention the city of Fuzuli. This city has become a large ruin graveyard. It saddens you to see all this.  Knowing in your mind that all the people who lived here had to flee.  How many people have been injured and killed here. It was terrible to see these destructions. This hurts your soul. At one point we turned off the main road to arrive via a gravel road in the village of Edilli at a newly discovered mass grave. It was horrifying to see what had happened here. In February I had already seen a mass grave here, but now another mass grave has been found here not far away from where I was in February. This grave has been carefully opened and the remains of the people (soldiers) who were murdered here have been treated with respect by the Azerbaijani. It is really very sad to see that these people have not had a chance. A few skeletons can be seen that had gunshot wounds to their heads. But it is also said that soldiers were buried alive. The most terrible thing was that all the skeletons were tied at the wrists and ankles with iron wire. It made me very sad to see this. What must have been going around in their heads at the last moment of their lives. What thoughts to their families. And the Armenian soldiers continued their atrocities there in Edilli as if nothing had happened. I personally hope that those who committed these murders are punished in whatever way. And that those murderers who are still alive will receive a fitting death. I was able to give several TV interviews on the spot about this massacre. I will never forget what I saw here. And will certainly mention all of this in my book on Karabakh. But we had to go further to arrive in Şuşa on time. Fortunately, they are working very hard to resurrect a new Fuzuli. Many people are working day and night to get the infrastructure of Karabakh in order as quickly as possible. A completely new highway is being built from Baku to Şuşa. The viaducts and large stretches of the new highway are already there. The electricity network is (has) been completely renewed in many places. Finally we arrived at the last "checkpoints" for Şuşa. This city is extra protected by a special police force in cooperation with soldiers of the Azerbaijani army.  A few meters on the other side of the road separated by a fence, we were watched by soldiers of the Russian army. The so-called "Peacekeepers"... I secretly laugh about it. Anyway, I have other thoughts on this. After the check we drove on to the Xaribülbül hotel. After handing in my passport, my roommate André and I got the key to the room. André is an American citizen who has served at the United Nations. A very amicable man. I was able to talk to him about various topics. After a good dinner for our group we went back to our room. Shower and drink some tea. Then turn off the light and go to sleep.

The next day, Sunday October 16, we went to various places in and around the city. Here too, they are working very hard to resurrect a new Şuşa. Old demolished buildings by the Armenian aggressors had completely disappeared since my presence in February 2022. Other buildings such as the mosques, museums and residences of important residents of this city are being renovated or restored as far as possible. The city is best known for its traditional Azerbaijani genre of vocal and instrumental art called "Mugham". For the Azerbaijanis, Şuşa is the "Conservatory of the Caucasus".  Khurshidbanu Natavan, Azerbaijan's most famous female poet, composer Uzeyir Hajibeyov, opera singer Bülbül and one of Azerbaijan's first twentieth-century novelists, Yusif Vezir Chemenzeminli, was born here. Molla Panah Vagif, a prominent Azerbaijani poet and vizier of the Karabakh Khanate, lived and died in Şuşa. Later we went to the Jidir Düzü plain. The Jidir Düzü (Horse Plains) has always been the main venue for festivities and sporting events in Şuşa. From the time of the foundation of Şuşa, wrestling matches were part of periodic competitions held by the Karabakh Khans.  Horse races as well as camel races were held here. Chovgan (Azerbaijani variant of polo) was also played here.

Participants in the games also excelled at jigitovka, a type of horse-riding stunt game. The mountains and valley that lie on the Jidir Düzü have a special significance. Azerbaijani Special Forces climbed these cliffs of the city and entered Şuşa on November 7, 2020 with light weapons and ammunition. They soon expelled Armenian troops from the city, and on November 8, 2020, Azerbaijani President Ilham Aliyev announced that Azerbaijani troops had liberated Şuşa from the occupation, but the Armenian leadership denied this. Nevertheless, the Ministry of Defense of Azerbaijan released a video of the city the next day, confirming that Şuşa was completely under the control of Azerbaijan. It was already time to drive to Baku. But first a dinner together in Azerbaijani cuisine style near Tərtər together with a good friend of Mr. Umud Mirzayev. It was an exquisite dinner with all the brilliance of Azerbaijan kindness. Then the last part to Baku and my apartment. Good home delivery by Ruslan Ibrahimbeyli. My thanks to everyone who got to experience this amazing journey.

But a very big "thank you" to Mr. Umud Mirzayev for all the good he has given us.