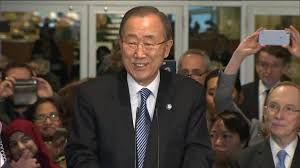 UN Secretary General Ban Ki-moon joked that he feels like Cinderella, as he prepares to step down at midnight on 31 December 2016.

The top diplomat beamed as he told a room full of UN staff: “I have just two words: ‘Thank you!’ Tomorrow night on the eve of the New Year, I’ll be in Times Square for the ball drop. Millions of people will be watching as I lose my job!”UN Secretary General Ban Ki-moon has hinted that he may shortly run for the presidency of his native South Korea.

In his final press conference as UN chief, Mr Ban said that after some rest he will return to South Korea and consider how best to help his country.

South Korea’s next presidential election is scheduled to be held in December 2017.