Unknown fighter jets tried to attack the Russian air base in Syria
Read: 908

Political crisis in Armenia hasn’t reached its peak yet - OPINION 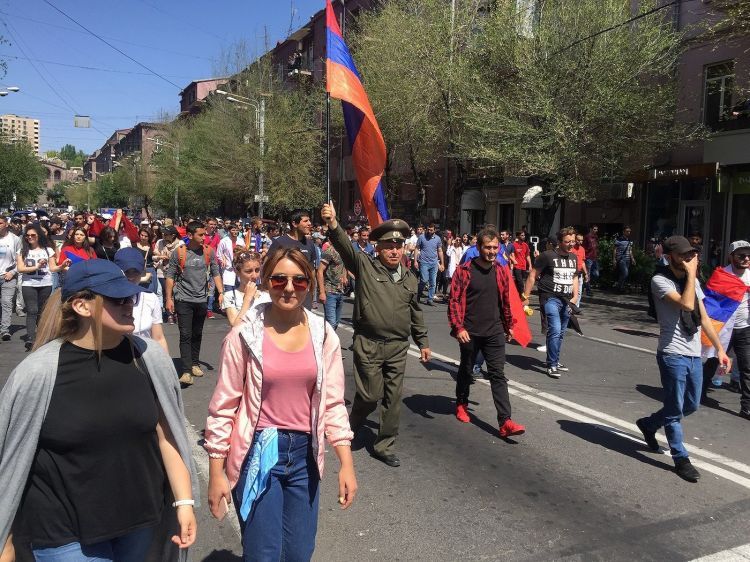 The candidacy of Nikol Pashinian, the leader of the civil disobedience in Yerevan and the only ambitious person to the prime minister position in Armenia, has not been confirmed in parliament on May 1.
In fact it is predictable, because the parliament is formed in a way that it is obliged to act under the authoritarian leadership of Serzh Sargsyan, ex-president of Armenia. The leader of the opposition could not take the position of the first person in the country. As a result of the long lasting political crisis, Armenia goes without president for another week and this situation is not normal.
The future prospects of the political process in Armenia depend on how much the ruling Republican Party will keep its power over the parliament, simultaneously how much Pashinian will be able to control mass protests.
The supporters in Yerevan and its protectors from Moscow hope that events will  develop on this scenario. However Armenia is not like Russia in this country tens of thousands of  workers who cannot take their money from the main job places are ready to hold political  demonstrations for 20 dollars a day.  Nichol  Pashinyan will not be in the half- finished of the highest post in Armenian government  as a former political warrior over a decade.
The sides of political confrontation in Armenia take unlikely steps to find a compromise. Each of them established funded and took position as a political force claiming the only power in the country.
Today government and opposition in Armenia differ from each other in terms of their geopolitical goals.
The first one is Russian-oriented and the second is American-oriented. That’s why today Armenia has become a new arena of the American Russian geostrategic confrontation after Syria. Each of the parties will do their best to keep the relevant groups of the Armenian political system in power.
Therefore, the political crisis in Armenia has not yet reached its peak.The future actions of Pashinian and his supporters (provided he is ready to go to the end of the struggle for power) is well-understood and expected. They poured into the streets and squares of Iravan to protest against Karapetyan, the prime minister of the Republic of Armenia, and then Serzh Sargsyan.
Thereafter, there is only one way that, it is to launch protests against this party by supporting international terrorism and accusing Russia of betraying national interests.
Technically, ERP's removal from power is possible only by holding new parliamentary elections while observing the legality of this process. According to the results of these elections, the authorities and the opposition will shift their places.  However, the Republican Party  itself terminate its activity that  before this party was side of the forces supporting them when authoritarian regimes were dispersed.
The fact that the Armenian National Assembly does not appoint Pashinian as country's prime minister is simply a temporary breakthrough in the further development of the Armenian domestic political crisis. Certainly, rallies in Yerevan have a chance to diminish. 8 and 9 May are the state holidays in Armenia and in the eve of these holidays the government and the opposition will cause unlikely confrontation by committing violence.
Nowadays, it is clear that Nikol Pashinyan is the only candidate for the post of Prime Minister of Armenia. Nikol Pashinyan is the most popular among the other candidates. Although Republicans try to find other alternatives for the post of the prime minister, it will be complicated within the country.
Oleg Kuznetsov
Political analyst