Britain can stop Brexit - But do its leaders want to? | Eurasia Diary - ednews.net

Britain can stop Brexit - But do its leaders want to?

Members of Parliament seem committed to voting down anything that resembles Theresa May’s withdrawal agreement—even if that means risking a “hard” Brexit. 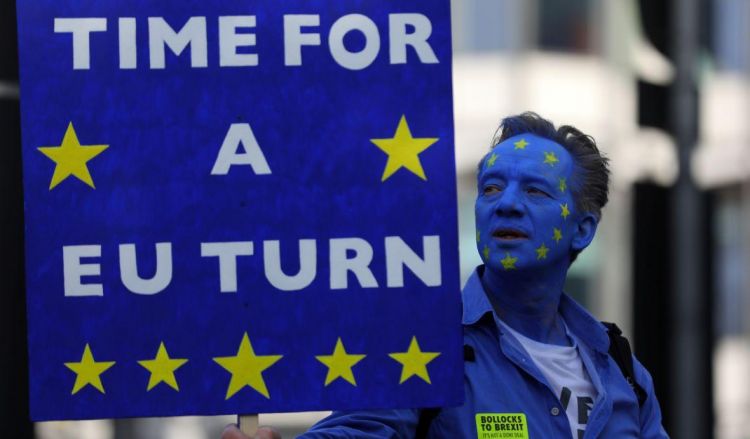 It’s official: Britain can stop Brexit if it wants to. That’s according to a bombshell ruling from the European Court of Justice (ECJ), the body charged with interpreting European Union (EU) laws and treaties.

To the casual observer, this might seem like good news. After all, Britain’s exit from the EU is not exactly going smoothly. Just yesterday, Prime Minister Theresa May announce d that she would not yet seek parliamentary approval of her desperately unpopular plan to take Britain out of the European Union (EU), prompting a packed House of Commons to respond with equal measures of anger, ridicule , and exasperation. The country is undergoing the biggest constitutional emergency since the Abdication Crisis of 1936, and nobody seems to be at the helm.

May’s government has spent over eighteen months putting together a withdrawal agreement to manage Britain’s exit from the EU. Among other things, the draft text provides for a two-year transition period during which negotiators will have time to hammer out a long-term relationship between Britain and the EU; affords Britain control over immigration from Europe; and guarantees an open border between Northern Ireland and the Republic of Ireland—something that all sensible people agree is essential to the peace process there.

But when it was published last month, the withdrawal agreement was roundly savaged by politicians from all sides, including over one hundred of the prime minister’s own Conservative MPs. As such, it faced little prospect of passing the Commons. Having now faced up to this reality, May’s credibility has been badly undermined. It is unclear whether she will be able to continue in office for much longer, or on what terms Britain will now be leaving the EU (if at all).

In truth, May’s opponents are unfair to lay the blame entirely at her feet. There seems to be no version of Brexit that could pass the House of Commons at this juncture. Two-and-a-half years after Britain voted in a referendum to leave the EU, MPs remain badly split on key questions such as the Irish “ backstop,” Britain’s future membership of the EU Single Market and Customs Union, the desirability of immigration controls, and even whether or not to press ahead with Brexit.

This domestic dissensus over Brexit portends serious consequences. The EU has made clear that it does not intend to reopen negotiations, meaning that May’s withdrawal agreement is, for now, the only exit deal in town. And if that agreement is not approved by March 29, 2019, Britain will crash out of the EU by automatic operational of law with no agreement to soften the blow. Almost everybody agrees that this would be a disastrous outcome.

Given this domestic context, the ECJ’s timely decision on the question of stopping Brexit could be viewed as a godsend. Just when it looks like Britain will be forced to crash out of the EU as a result of its leaders’ squabbling and indecision, the ECJ has provided a way out. If they can’t agree upon how to exit the EU, MPs can just choose to exit Brexit. Right?

The problem is that none of Britain’s leaders currently want to cancel Brexit. At least, no frontbench politician is brave enough to say so. Only a vocal minority of backbenchers is calling for this option. Moreover, it’s difficult to imagine a sequence of events that would put one of these so-called Remainers (“Remoaners” to their critics) in charge.

From the perspective of Britain’s top leaders, domestic politics makes a powerful rod for their backs. The country voted 52-48 percent in favor of leaving the EU in June 2016. Last summer, a snap election was held where a whopping 90 percent of Members of Parliament (all Conservative, Labour, and Democratic Unionist MPs) were elected on party platforms that committed themselves to implementing Brexit. And even if some parts of the country still support remaining inside the EU, an estimated 75 percent of Conservative-held seats voted to Leave, along with 61 percent of Labour-held seats.

Taking those numbers into account, it would be bold prime minister indeed who dared to cancel Brexit. The repercussions of trying to overturn “the will of the people” would be severe. Theresa May shows no pursuing this option. Nor does Jeremy Corbyn, the left-wing leader of the Labour Party who has a long track record of Euroskepticism, or any of the likely contenders who might replace May as leader of the Conservatives. And so while a growing number of backbench MPs have called for Brexit to be stopped, their influence will always be limited for as long as the current occupant of 10 Downing Street favors Brexit.

The default option is still that Britain exits the EU in March 2019 whether there is a formal withdrawal agreement in place or not. Something affirmative must happen in order to avoid the chaos that such a “no-deal Brexit” would entail: gridlock at Britain’s ports of entry, food and medicine shortages, a currency crisis, and more.

Before this week, the most likely outcome was that enough MPs would eventually hold their noses and consent to May’s withdrawal agreement (or something close to it) to avoid the calamity of a disorderly Brexit. The ECJ’s ruling has complicated this calculus. Hardcore Remainers might now conclude that they are best served by voting down any and all proposals to withdraw from the EU, betting that May or any future successor would ultimately agree to cancel Brexit rather than succumb to a no-deal Brexit catastrophe.

Hardline Brexiteers, on the other hand, might still be encouraged to back an imperfect withdrawal agreement if this means securing Brexit in at least some form. At the moment, however, most of these MPs too seem committed to voting down anything that resembles May’s withdrawal agreement even if this means risking a “hard” Brexit outcome. Evidently, they do not yet view the prospect of “no Brexit” as a threat credible.

The only other option is for London to beg the EU for an extension period during which a new withdrawal agreement can be negotiated. The EU has already said that this outcome is off the table, but European leaders might be persuaded to change their minds if, for example, a new government comes to office, perhaps following a fresh general election or with a mandate to hold a second referendum on Brexit. This track of restarting negotiations seems to be the preferred plan of both the Tory and Labour leadership.

There is some irony to all this. By ruling that Britain has the unilateral power to cancel its exit from the EU, the ECJ has confirmed that, at least in this instance, Britain is not beholden to whatever Europe will agree to. Rather, Britain has the clear and undiluted sovereign authority to avert the chaos of a no-deal Brexit. It is just that none of Britain’s top leaders want to exercise this authority. Whether the domestic political landscape will shift to allow a different outcome remains to be seen.

Peter Harris is an assistant professor of political science at Colorado State University.