How will the fate of our children who is begging medicine from foreign journalists? - - Explanation from the Foreign Ministry | Eurasia Diary - ednews.net

The loss of the four young men is extremely sad and we share grief of their families – British journalist
Read: 702

How will the fate of our children who is begging medicine from foreign journalists? - - Explanation from the Foreign Ministry

The new article, published by ‘’Reuters’’ on April 30, is of special importance for Azerbaijanis. In this article, information was provided about the Azerbaijani women and children, who were arrested in Iraq and were in a very severe condition, victims of their husbands and fathers' sins. 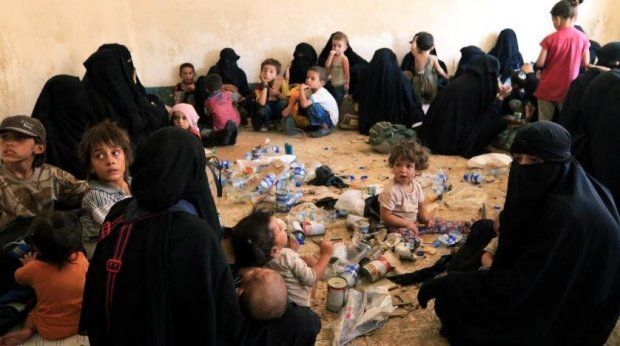 Reuters journalists visited the prison in which the ISIS members were kept in Iraq - Rusfa. It should be noted that 1241 foreigner wives and children of suspected ISIS fighters are kept in this prison. They represent more than 12 countries. 774 are between the ages of 9 months and 15 years. There is no exact information on how many of them are Azerbaijanis, but there are several Azerbaijani children and women in the article. One of the Azerbaijani women said, " I beg you we want to go home, help us. This is not a good place for us, "he told the journalist.

"Have you brought us clothes and medicines? We need medicines, "a girl with a blue hijab poured into a correspondent. The journalist writes that she speaks about 100 children. It turns out later that this mother was sentenced to life imprisonment by the Iraqi court for her mother's being a member of a terrorist group.

Baghdad's capabilities are limited, Iraq wants the tribunals to be sent to their countries. However, many countries have refused the acceptance of these individuals, since this is a legal, complex, political "poisonous" issue.

‘’The court decided to execute within 5 minutes’’

It is clear from the article that our compatriots in Iraq are in serious condition. It should be noted that the women and children there are not actually involved in any military operations or assaults. Participation of majority of women in ISID took place on the basis of their husbands' commitment. And children can not talk about their sins at all. In addition, courts of convicted women are also formal. We did not know how much we worked about the criminal cases and court bases on our compatriots there. At the same time, we contacted our Turkish colleague Ilker Akgüngör, who prepared a series of repatriations about Iraqi women, convicts from Azerbaijan, Turkey and other nations a year ago.

Akgüngör notes, "In general, the conditions for the detention of women and children were very heavy. Courts are formal. At one of the courts, our journalist colleague took part. In that court, the judge asked 3 questions to the prisoner. After 5 minutes, the court decided to execute. Usually, the court gives many prisoners either life imprisonment or executions. Most recently, I know there were 328 Turkish women. Of course, we also met Azerbaijani women there. There is no woman who wants to stay in Rusfa. Everyone wants to be tried in their own country with their children. According to the information we have obtained, many women who do not tolerate severe conditions kill themselves, and have more orphans and more children. Of course, we do not know how many of them are Azerbaijani songs. "

What does the Azerbaijani government do to regain the innocent children and women our compatriots?

"20 minors have been returned to our country"

We called the Ministry of Foreign Affairs to clarify this matter. Foreign Ministry Spokesperson Leyla Abdullayeva said that the Azerbaijani Embassy in Iraq is regularly in touch with the Iraqi Foreign Ministry and other relevant bodies. As it is known, 20 minors who lost their parents in Iraq last year were returned to our country. Works in this direction are continued accordingly.

We also addressed the same question to the State Committee on Family, Women and Children Affairs. From the committee's answer we understood that the committee has done much to return the orphan children in Iraq. However, when our question was directed to Azerbaijani women living in detention under severe conditions, we could not get a concrete answer from the committee.

Is it possible for each of our compatriots to return to Azerbaijan? Does international law allow it?

Mehdiyev noted that there should be a formal requirement for the return of women and children held in Iraq. The Azerbaijani government should at least request the return of minors in Iraq at an early stage.

As far as we know it was returned to a few minorities last year. In addition, I believe that there is a need for a contract between the two states for the return of each prisoner. This agreement is an extradition contract. Azerbaijan has concluded such an agreement with Turkey, Hungary and other countries. For example, Ramil Safarov was brought to Azerbaijan under an extradition agreement between Azerbaijan and Hungary.

"Most of them are innocent"

I also think that not only minors but all the prisoners in Iraq under severe conditions need to be returned. Because most of them are innocent. Moreover, the Iraqi legislation is completely different from the Azerbaijani legislation. For example, the prisoner may be given life imprisonment or execution without concrete evidence or proof.

At the same time, prison conditions in Iraq are very poor. Azerbaijani prisons have been formed and are constantly under the control of the relevant principles of the European Union and other international human rights organizations. But for Iraqi prisons, this is not the case. The ecological situation is not normal there. Therefore, as mentioned in the article, the health and condition of our compatriots there is not really heartwarming.

F. Mehdiyev also said that, in essence, the arrest, release or extradition of our compatriots there is under the authority of the Iraqi government. This is the internal matter of Iraq. But, Azerbaijan may exercise diplomatic patronage. This right applies to state, not to citizens. At the same time, it can be applied to UNICEF regarding the severe situation of children there. Even Azerbaijan may appeal to the UN Human Rights Committee if the Iraqi prisoners are protesting. There are not concrete cases about the fact that most women, especially the majority of minors in Iraq, are involved in any terrorist act, and they are kept in a very difficult situation as seen in Reuters. More likely, they faced inhumane behavior. Therefore, I would like to note that there are different ways to return our compatriots to the country. The main maniacs are their members or family members being members of the terrorist group and not being sought by their families. Because many families have refused their children. In order to initiate the legal prerequisite, parents must have a request and an official appeal to the relevant authorities.