Closing Hormuz is WAR message to US - Political analyst 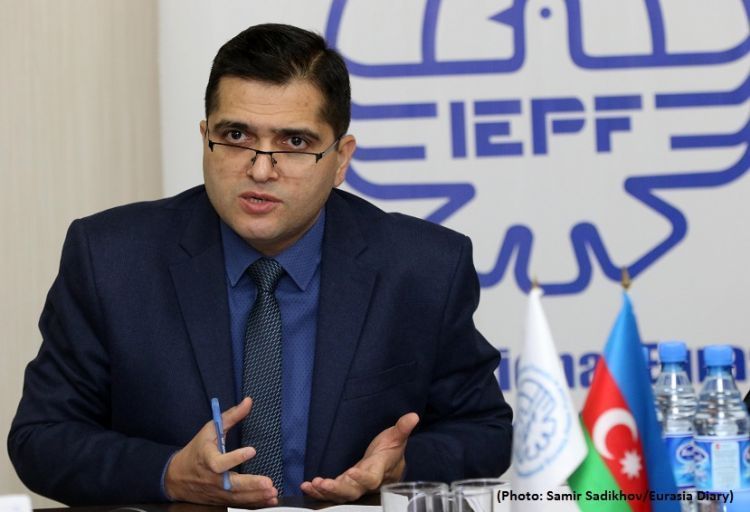 One of the main topics debated on was Iran-US tension. He talked about whether there is a possibility of war between these countries.

"US secretary of state Mike Pompeo canceled his two official visits because of Iran. Firstly, he had to visit Germany which its close ally in Europe. However, he visited Iraq instead to discuss Iran issue and Germany took offence at this behavior. Secondly, he delayed his trip to Sochi and visited to Brussels to talk issues over Iran again."

"Now Iran is the critical issue at stake, for the region, the world and US. What is Trump’s purpose? I think Trump has a strategy and has been using it for a long time. It is ‘America First’ pledge and to realize it. He criticized the expenditure allocated to NATO, renewed trade agreement with Canada and Mexico and increased custom taxes on Chinese goods. Same happens with Iran; threating. Trump wants to negotiate under such unfavorable conditions that Iran will never accept them."

"The objective of the Trump Administration is not about the nuclear program. In fact, Iran halted the nuclear process after signing the nuclear deal. Both Israel and US aim to weaken Iran, to marginalize its effect to such extent that it will not able to interfere in internal affairs of neighbor countries. Although Iran’s economy began to falter, it still keeps meddling into domestic affairs of Yemen, Iraq, Lebanon, Saudi Arabia, and Palestine. Why does Iran step in? To fend off outside threats. It wants to keep possible threats outside its borders, and this is understandable."

"US wants to regime change in Iran. As recent history shows that US did manage well the first step of this process, overthrowing regimes. It toppled regimes in Iraq, Lebanon, and Libya. However, it cannot regulate properly next step. Regime change in Iran is very dangerous for Azerbaijan, and we may face humanitarian crises. This is only small concern for US since it does only care its own interests. Iran refuses responsibility for tanker attacks on the Strait of Hormuz and fuel tank truck fired at Sadarak border post. It shows there is a third power factor that can fuel the tension into a war.”

Due to economic difficulties in Iran, there are enormous pressures on the President Rouhani from both conservative ideological opponent side and his progressive bloc. Recent US moves may provoke political disagreements between two blocs in Iran. However, Shahinoglu thinks that it brought adverse results. He said: “These moves strengthened Khomeini’s hand. Iran government signed the nuclear deal with the Obama Administration on the purpose of bringing foreign investments into the country, thus to solve economic problems. But the deal did not generate desired results. Trump withdrew the agreement. Consequently, Khomeini gained an edge over Rouhani due to failure of the deal.”

Iranian top naval commander threatened to close the Strait of Hormuz after the US decision to terminate sanction waivers on Iranian oil. Shahinoglu said that if Iran is going to shut down the Strait it means a declaration of war.

“Closing the Strait of Hormuz means to declare war against US by Iran. US has sent aircraft carriers to show the possibility of military operations in case of closing the Strait. Both conservatives and progressive blocs don’t want any war with US. They think rationally since war can bring unbearable cost to Iran. What can Iran do? US is on another side of the ocean. Iran can only attack Israel and stir up troubles in Iraq, Saudi Arabia. Then regional wars will began and Iran is going to break down itself as well. Iran takes this risk seriously. In the 2000s the former President Mahmoud Ahmedinejad continued nuclear program, and in reply to this US started to intensify sanctions. US and Israel stated that they would launch rockets to Iran and would use Azerbaijani territory. This announcement caused relations become tense. There were a lot of pressures from Iran on Azerbaijan although we clearly expressed that we didn't want to be part of any game. The situation was really critical.” he added.

Iran is trying hard to get out of US led sanctions and export oil without any external sanctions. But how Iran will make this happen? According to the political analyst since the Iranian Revolution in 1979, Iran faces economic sanctions. However, now sanctions became so much severe.

“Today besides Iran, states and business which cooperate with Iran are sanctioned by US as well. India and China are two important buyers of Iranian oil. In the presence of sanctions, Iran will sell illicitly, which it does not give any benefit to Iran. It will sell cheaper and has to cooperate with criminal enterprises to transport oil” he said.

Finally, according to him there is a threat or risk of an imminent war. Any little spark can cause a war in the region and this will contradict with the national interests of Azerbaijan.