The very idea of a united kingdom is being torn apart by toxic nationalism - Gordon Brown | Eurasia Diary - ednews.net

'At best, vaccine will be found in 9 months, while at worst virus will spread again' - UN Secretary-General says
Read: 476

Boris Johnson’s Brexit strategy is imperilling centuries of common purpose. It can’t be allowed to succeed 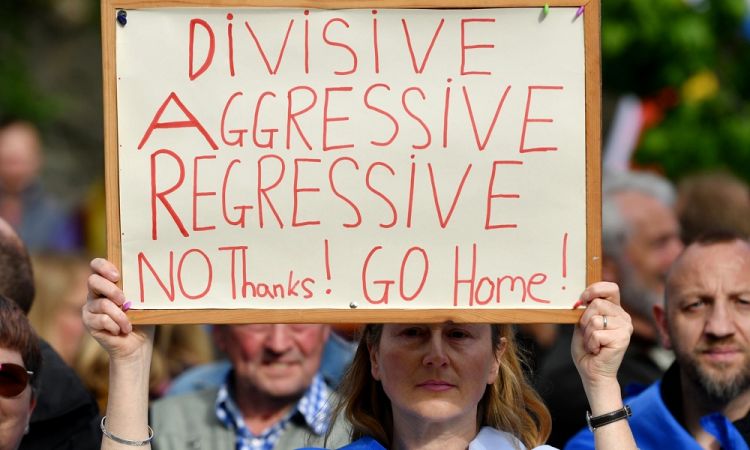 The first step to solving a problem is to see it clearly. And if we are to understand why we are facing not only our most serious constitutional crisis since the 17th century but an unprecedented economic calamity precipitated by a no-deal exit from the EU, we must recognise that nationalism is now driving British politics.

Having set almost impossible terms for any negotiation with Europe and preparing to renege on legal obligations to pay our debts to the EU – the economic equivalent of a declaration of war – Boris Johnson’s government is hell-bent on conjuring up the absurd and mendacious image of the patriotic British valiantly defying an intransigent Europe determined to turn us into a vassal state.

His soundbites, pledging token sums for the NHS and 20,000 more police on the street at some future date, cannot disguise a government driven not by the national interest but by a destructive, populist, nationalist ideology. And with Scottish nationalists pushing a more extreme form of separation and Northern Ireland’s unionists becoming, paradoxically, Northern Irish nationalists – digging in, even if it means, against all economic logic, a hard border with the Irish Republic – we are, at best, only a precariously united kingdom.

Johnson’s flying visits to all corners of the UK have done nothing to dispel the impression that under him the world’s most successful multinational state is devoid of a unifying purpose powerful enough to hold it together and to keep four nationalisms – Scottish, Irish, English and also a rising Welsh nationalism – at bay.

Recent polling shows a majority of Scots support Scottish independence. In a new Hope Not Hate poll, many more – 60% – agree a no-deal Brexit will accelerate the demand for independence. Only 15% disagree.

What is most worrying is not just that so many think the union will end but how at least for now so few appear to care. Only 30% of British Conservatives (and only 14% of Brexit party voters) would oppose Brexit if it meant the break-up of the union: 56% of Tories (and 78% of Brexit party voters) – in total 70% of Leavers – would go ahead regardless, even if the union collapsed.

Three weeks into the Johnson premiership, English nationalism is on the rise, the Conservative and Unionist party has been reincarnated as the Conservative and Brexit party, unionism appears to be sleepwalking into oblivion and the UK, once admired around the world for an understated but comfortably unifying Britishness that was inclusive, outward-looking, tolerant and ultimately pragmatic, now presents an ugly picture: of bitter division, intolerance and introversion so extreme that it has sacrificed common sense in favour of a dogmatic abandonment of its own best interests.

Incoming governments normally announce that they will seek to serve the whole electorate. Now, playing out in triplicate across the UK is a “divide and rule” approach to leadership, straight from Donald Trump’s playbook: each faction consolidating its base, choosing an enemy and accusing opponents of treason in the hope that in a multiparty system they can win with a minority of votes. True to form, Johnson adviser Dominic Cummings depicts the House of Commons as the enemy in a “people v parliament” election, with the people led to believe – by a costly public information campaign that is nothing more than Brexit propaganda – that their parliament is prepared to betray democracy and abandon traditional national values. Next, the Tories will likely embrace Lynton Crosby’s well-honed election strategy: to whip up English nationalism by demonising immigrants as well as perfidious Europeans and playing the Scottish card he so successfully deployed in 2015, with the spectre of a minority Labour government controlled by an even smaller minority of Scots.

As this hardline nationalism tightens its grip, there is much worse to come: Johnson joining Nigel Farage in insisting that a no-deal Brexit on 31 October is the only true expression of patriotism; trade wars putting English and Scottish businesses and jobs in jeopardy; Scottish separatists not just threatening to leave every institution of the UK but planning for a no-deal exit too; a rerun of the old pressures for an Irish unification poll; and England being pushed towards a self-regarding xenophobia.

The SNP is already peddling what it claims is a progressive, pro-European Scottish nationalism that must break free from Johnson’s reactionary, anti-European and anti-Scottish English nationalism – and the inescapable conclusion that only thus can Scotland regain its dignity. But if the UK pound, the UK customs union and the UK single market all go, this desire for hard – not soft – separatism ignores the hundreds of thousands of jobs at risk of going too.

Labour’s role should be to stand up for Britain’s true economic interests but a few days ago its shadow chancellor, John McDonnell, also fell straight into the nationalist trap, suggesting a Scottish parliament should not be frustrated by what he called the “English parliament”.

Unionist parties in Northern Ireland should have been persuaded that their stated objectives – the integrity of the UK and an open border with the Irish Republic – could be best secured by continued membership of the customs union and single market. Such an outcome would have better reflected the dominant pro-European vote of Northern Ireland’s electors. But the DUP has convinced itself that its stance on Europe has to be couched in purely nationalist terms – as a test not of what’s best economically for Northern Ireland but of whether a diehard brand of nationalism will prevail.

As the Second World War ended, George Orwell made a distinction between patriots who instinctively love their country and the opposite, a political nationalism that he defined as “power hunger tempered by self-deception”. He noted its defining features: unreality about the country’s prospects; introversion bordering on the xenophobic; and hate-filled obsessiveness that treats people solely in terms of their loyalty and utility. Orwell argued passionately that the descent into a narrow, chauvinistic nationalism could be halted only by what he called “moral effort”.

In our times, this means we must rediscover the age-old virtues of empathy, solidarity across borders, reciprocity between nations and co-operation rather than conflict. These precious ideals – and a tolerant, inclusive and outward-looking Britishness – could not survive the divisiveness and chaos of a no-deal Brexit. To prevent the rise of dysfunctional nationalism, the first step is to stop no deal in its tracks.