Unknown fighter jets tried to attack the Russian air base in Syria
Read: 647

After returning from Khojaly, I started drinking... - British journalist: We sympathized with the Armenians
Read: 316

Operation Peace Spring in views of Turkish and US Military experts 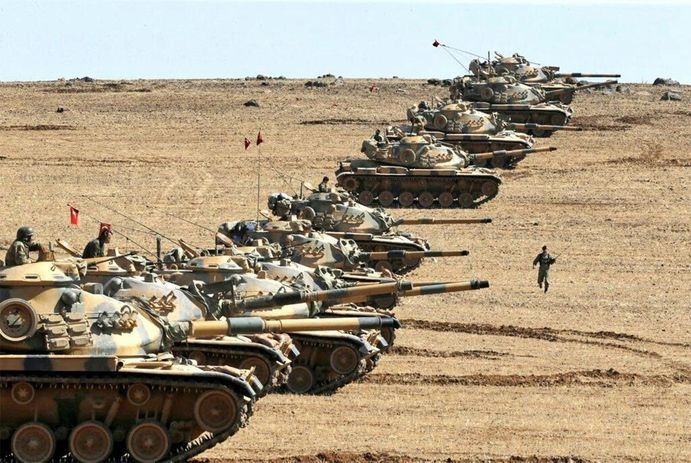 What are Peace Spring operations? What are the targets of Turkey? Can Turkey achieve its goals?  Eurasia Diary asked for experts for finding the answers.

Retired intelligence officer Lieutenant colonel Rick Francona who was involved in the several mission in Iraq and Persian Gulf told to Eurasia Diary. Rick Francona thinks that allowing Turkey to move into Syria mean exit of US forces.

"If I read the President’s words correctly, US forces will be departing the border area, and possibly all of Syria shortly," he said.

The military analyst thinks that this move will make other powers free hand. "I am very concerned that without any US presence on the ground, not only will the Turks have a free hand in the area, but also the Russians and Iranians as they continue to prop up the Syrian regime. Will the Americans simply pull back to Iraq, or is Iraq the next withdrawal?"

US withdrawal perceived as "stab in the back" by Kurds.

"Hard to argue with this. I spent a fair amount of time working with the Kurds in the mid-1990s. Even then, the perceived betrayal of the Kurds in 1975 as part of the fallout of the Shah’s signing of the Treaty of Algiers was still a sore point with the Kurds. It appears that we are repeating the same treatment, this time at the behest of what I regard as a questionable NATO ally - Turkey."

"I put little stock in most anything Zarif says. Iran and Turkey – as well as Russia – are cooperating in Syria. Why Zarif wants to portray this as anything different is beyond me. I find Zarif’s defense of mythical “Syrian sovereignty” amusing. The real power brokers in Syria are, in terms of importance, Russia, Iran, and Turkey," Rick Francona said. Eurasia Diary asked that how much can Turkey be successful in these operations:

"This is a big question. Turkish forces are well-equipped – armor, artillery, aviation, reconnaissance, special forces, etc. That said, their previous operations in Syria have been rather amateurish, and in most cases, failed to achieve their objectives. Just look at their operations in Idlib and Afrin. Are they really going to mount an invasion along the entire Syrian border? Subduing military councils is one thing – taking on a committed Kurdish guerrilla force defending their homes may be a different story," he concluded. "The target area of ​​the Afrin operation was about 3,000 km2. In the "Olive Branch" operation, Manbich was left behind and the area of the operation was 2,000 km2. If the control of MB4 includes to the current operation of the Peace Spring as a political target, then the scope of the operation was included in the Manbij. In this case, there will be an operation that will cover approximately 16,000 km2. And this figure is eight times larger than the Afrin and Olive Branch operations. If the operation can spread to Raqqa and Deir al-Zor provinces, as Erdogan points out, and reach a depth of 40 km, then the existence of the YPG-PKK in Syria could be put to an end. This area means 3/1 of Syria. Everything will be very different. This operation has serious political, military and geopolitical risks, and because of the risks it carries, the Peace Spring cannot be compared with previous operations.” "So far, the US has donated 30,000 truck military equipment to the YPG. The YPG has 65,000 terrorists, at least 14,000 fired at the Turkish army in the mountains. There are anti-tank, anti-air defence systems, armored vehicles, etc. The YPG is well-armed, but the key point is YPG is allowed to use how many US weapons."

"Turkey will not abandon this vital operation because of Trump's threats. This is one of the most important and large-scale military operations in the history of our nation."

Aghar also mentioned that there is high motivation in the army. He said that he spoke with a Turkish general at the border. The general said: "We have one life, and let it be sacrificed for our nation and homeland."