Barcelona and Arsenal are set to battle it out for PSV striker Donyell Malen in the January window. 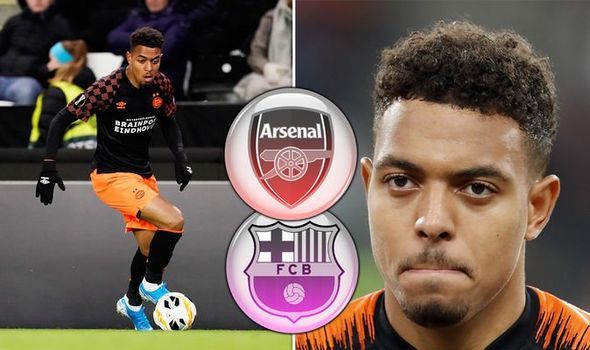 Barcelona are looking for a replacement for Luis Suarez and they think Donyell Malen will be an ideal fit.
The 20-year-old is having a breakout year at PSV and has scored 16 goals in 18 appearances in all competitions this season.
And according to Spanish publication Sport, Malen is on a transfer shortlist drawn up by the club.
However, Barcelona are concerned that with a lack of available strikers currently on the market it could result in Malen’s price tag becoming excessively high.
Barcelona have shown in the past they are not willing to pay over the odds for a player and the Catalan club turned down the opportunity to sign Luka Jovic in the summer.
And according to the report they are not willing to pay an unreasonably high amount for Malen.
Barcelona had been interested in Jovic during the summer, after the striker had scored 27 goals in 48 games in all competitions for Eintracht Frankfurt last season, but were put off by his price tag.
But Real Madrid were not, and ended up coughing up €60million (£53m) for the Serbian, although he has yet to score for his new club despite playing 10 games for Los Blancos.
However, Barcelona are not the only club interested in Malen and they are likely to have competition from Arsenal, his former club, as well as several other Premier League sides.
Malen began his career at Ajax, but at 16 he joined the north London club.
At the Gunners academy he was used more as a winger, but since his return to the Netherlands he has returned to a more central position, where he has demonstrated his ability for finding the back of the net.
If he did return to Arsenal it would be acceptance of a very poor decision to let the player leave, as Malen joined PSV two years ago for just £200,000 and according to reports there wasn’t a buyback clause included in the deal.
However, Arsenal club director Josh Kroenke did hint during the summer that the club would be looking to continue doing deals in January.
“Our ambitions are the same as the fans,” he said back in August.
“We want to win and we want to win as much and as often as possible. And doing it in a fun way, where they’re seeing some really entertaining football as well.
“I think we’ve got the group to do it. As for January, I don't want to get ahead of ourselves.
“We’ve got to evaluate some things in the short term and figure out where we might need to address areas going forward, so when January does roll around we’re going to be proactive again.”