It was expected the Premiership champions would discover their fate on Thursday. 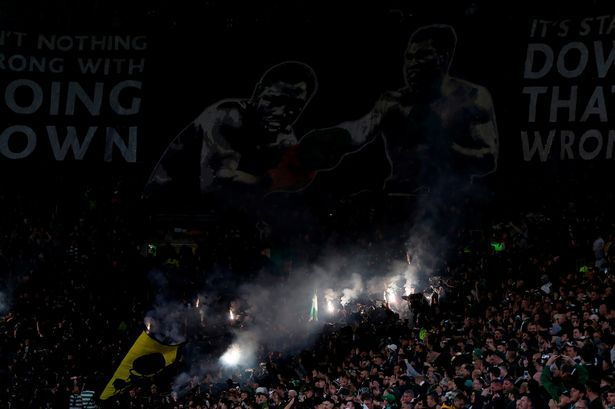 Celtic are facing an anxious wait over their latest UEFA pyro charge with the governing body not expected to deliver a verdict until Friday or the start of next week.
It was expected the Premiership champions would find out their fate today after fans let flares off against Cluj in the Europa League but Record Sport understands the decision has been pushed back.
Supporters landed Celtic in the UEFA dock for the 17th time in 12 years for the misdemeanour against the Romanians with the latest incident taking place just weeks after the club were sanctioned over a similar incident away to AIK.
The Parkhead side were hit with a £11,013 fine for the misbehaviour of supporters in Stockholm.
Celtic released a strongly worded statement in the wake of the latest charge and told supporters enough was enough after UEFA once again took them to task.
It read: "Following the latest UEFA charge against the club for the use of fireworks at Celtic Park , it is with real disappointment and frustration that the club needs to appeal again for this behaviour to stop.
UEFA’s stance on the issue of pyrotechnics is unequivocal.
"The club has been sanctioned on numerous occasions and yet, very disappointingly, this behaviour by a small minority persists.
"The serious safety concerns associated with such behaviour are obvious, as is the reputational damage which this behaviour and these charges have on the club. In addition, the numerous financial penalties placed on Celtic continue to come out the pockets of supporters who invest in the club.
"Celtic will be introducing further measures in order to deal with this behaviour. It has to stop.
"The club does not want it, our supporters do not want it and UEFA will continue to punish the club whenever it occurs as it is a clear breach of their regulations. It really is as simple as that.
"Given the number of repeated offences, we should also be very aware that there could be further, very serious repercussions which could have hugely detrimental consequences for the club and our supporters. It is hugely unfair that the enjoyment of Celtic matches could potentially be affected by the negative behaviour of a tiny minority."