Toni Kroos with a Brace against Belarus to lead Germany to Euro 2020 | Eurasia Diary - ednews.net

Azerbaijan has right to use its armed forces to take back its legally acknowledged territory - British journalist
Read: 6107 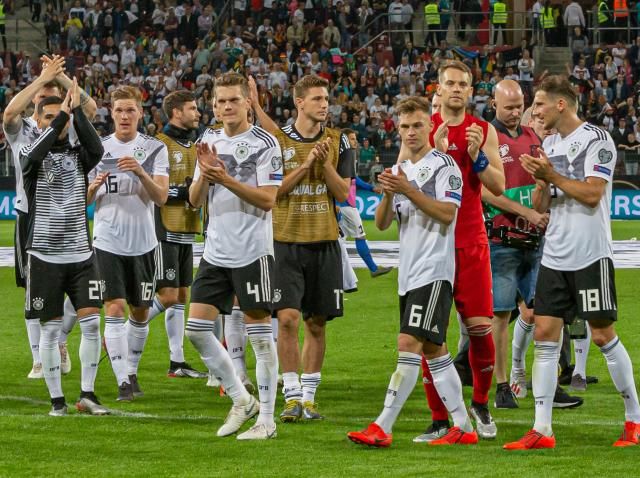 Germany has capped off a campaign that was mostly about rebuilding this side with a 4-0 victory over Belarus on Saturday (Nov. 16). The Netherlands only managed a 0-0 draw in the parallel game against Northern Ireland.
As a result, the Germans can win Group C with a win over Northern Ireland on Tuesday. Although the two top teams of each group advance automatically topping the group would be a significant achievement for a Germany side that is looking back to two difficult years.
Early elimination from the 2018 FIFA World Cup was followed with relegation from the UEFA Nations League A in the fall of 2018—although since rectified due to rule changes, the relegation was a significant blemish on Die Nationalmannschaft.
The story of the game is quickly told. Germany dominated much of the first half but had to rely on the excellent Manuel Neuer, who came up with a fantastic save in the 40th minute to keep out Igor Stasevich, to keep the score even. Two minutes later, Matthias Ginter opened the scoring for Germany with a beautiful flick after a Serge Gnabry cross.
It was Ginter’s first-ever goal in a Germany shirt scored in style at his home stadium in Mönchengladbach. "His first Germany goal tonight?” goalkeeper Manuel Neuer said after the game. “Well, after 29 games, it is about time. No, he did very well to score in style.”
“[Neuer] is right; after 29 games, it was about time,” Ginter said. “Scoring here in Gladbach is the icing on the cake.”
Ginter’s first-half goal made it easier for Germany in the second half. Leon Goretzka would double the lead in the 48th minute. The goal was beautifully set up by Toni Kroos, who had a fantastic game. The 29-year-old would add two stunning goals (55’ and 82’) to pack a brace against Belarus.
Belarus, however, was a challenging opponent against Germany on Saturday. Neuer did not only have to come up with a big stop in the first half but also saved a penalty in the 74th minute—once again, Stasevich was the player denied.
The penalty was caused by 23-year-old Robin Koch. The Freiburg center-back was called up by Bundestrainer Joachim Löw for the first time for Germany’s games against Argentina and Northern Ireland one month ago.
Koch is certainly talented but seems not quite ready yet to fill the void left by Niklas Süle’s injury. But with Löw’s refusal to bring back experienced defender Mats Hummels, Koch is the best Germany have in the position at the moment.
Koch’s mistake highlights that Germany still needs to rely on experienced players. After all, it was the 33-year-old Neuer, who denied the penalty. In midfield, 29-year-old Toni Kroos put together a master-class, and defender Matthias Ginter opened the scoring early on. The three are the only players remaining in the squad to have won the 2014 FIFA World Cup.
“We still lack a little bit in experience, but certain procedures are working better and better,” Toni Kroos said to the media after the game. “We will know where we stand shortly before the tournament. Currently, I would not count us amongst the top favorites. But that doesn't always mean anything.”
Going by current market value, Germany’s squad is still among Europe’s elite. According to Transfermarkt current squad has an average market value of €36.39 million (£30 million), which ranks Germany only behind England, France, and Spain.
“We have reached our goal, the team has played well,” Löw said after the game. “We have seen good movements and plays. Sure, not everything was perfect, but as a bottom line, I am pleased with what I saw.”
For Löw, early qualification to the European Championships is good news; it means that the Bundestrainer can use the final game against Northern Ireland to experiment. As for the tournament? Germany will always be among the nations to be counted upon when it comes to lifting the trophy, but the absolute top favorites will be the likes of France, England, and Spain.