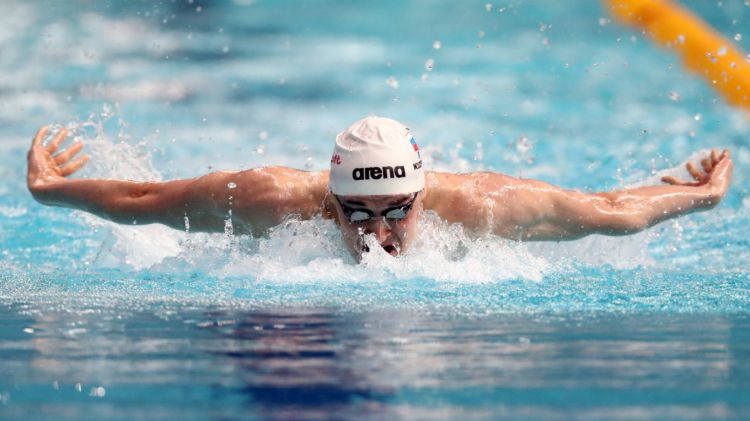 A pair of elite Russian swimmers have been provisionally suspended from the Tokyo Olympics over doping violations on the eve of the games, the International Swimming Federation (FINA) announced in a statement on its website Wednesday.
The athletes, Veronika Andrusenko and Alexander Kudashev, had been set to compete under the banner of the Russian Olympic Committee (ROC) rather than the Russian tricolor at the Tokyo Games which start July 23.
FINA said it asserted the anti-doping rule violations based on evidence supplied by the World Anti-Doping Agency (WADA) including material recovered from the former Moscow Anti-Doping Laboratory. It added that “a procedure is now ongoing” regarding the provisional suspensions.
FINA President Husain Al-Musallam thanked WADA for its “diligence in helping to ensure clean competition at Tokyo 2020.”
Andrusenko, a two-time Olympian, won silver and bronze medals at World Championships in Budapest (2017) and Barcelona (2013). She was entered to compete in the 200 meter freestyle in Tokyo. Kudashev was set to race the 200 meter butterfly.
In 2019, Russia was slapped with a four-year ban from competing in international sporting events after WADA found that Russian authorities had manipulated data and orchestrated a cover-up of an extensive, state-sponsored doping program.
The ban was later reduced to two years, with Russian athletes cleared of doping allegations allowed to compete under a neutral flag and without their country’s anthem.
Russia objected to the neutral flag requirement and ultimately reached a compromise with the International Olympic Committee allowing athletes to compete under the ROC flag with music by composer Pyotr Tchaikovsky. The name “Russia” is officially nowhere, as athletes will compete specifically under the acronym “ROC.”
Now in its sixth year, the doping saga remains a point of sharp contention and bruised pride, with former Russian Prime Minister Dmitry Medvedev describing the IOC ban as "chronic anti-Russian hysteria.”
Andrusenko and Kudashev are not the only athletes to fall foul of anti-doping authorities in the run-up to the Tokyo Games. Last week, suspensions were handed down to two Tokyo-bound Russian rowers who tested positive for the banned substance Meldonium. And on July 3, American sprinter Sha’Carri Richardson received a one-month suspension after admitting to marijuana use.