Cristiano Ronaldo ‘is not the problem’ at Manchester United - as star ‘nets huge £850,000 bonus’ - ednews.net

Cristiano Ronaldo ‘is not the problem’ at Manchester United - as star ‘nets huge £850,000 bonus’

Cristiano Ronaldo netted his 50th club career hat-trick versus Norwich City on Saturday – however a new personal record isn’t the only thing the star secured. 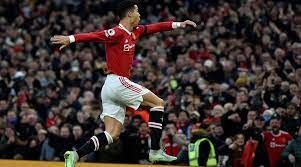 Despite an underwhelming season for Manchester United and protests now adding to the mounting pressure, Ronaldo has been touted as one of one of the silver linings for the Red Devils.

And according to The Sun, the former Juventus man is certainly being rewarded for his efforts.
Ronaldo surpassed the 20 goal mark against the Canaries, taking him to 21 and triggering his £750,000 bonus. His treble in the game then gained him another £100,000.
The cash incentives don’t stop there though for the £480,000-per-week 37-year-old.
Should he reach 30 goals this campaign, Ronaldo will bank £2.75 million more in total.
He’s also almost certain to be United’s top scorer this season following his consecutive hat-tricks at Old Trafford in the Premier League, which means an incoming prize of £1 million.
The big cash rewards are coming in thick and fast for the five-time World Football of the Year, and talkSPORT’s Tony Cascarino has joined in with praising Ronaldo for ‘working his socks off’, despite the unrest at the club.
“People might go down the Galactico road and say United didn’t need to do that [sign him],” the former Chelsea striker said on Weekend Sports Breakfast.
“They need to buy younger players for the future. You know, there’s nothing wrong with bringing in a great pro, someone who’s achieved everything.
“I would never question his desire and attitude. I think he works his socks off. You know, he’s obsessed with being as fit as possible.”
Cascarino continued to praise United’s talisman, stating the Portugal international shouldn’t take the blame for the Red Devils’ disappointing season.
“I actually think he’s done really well this season, and I’ve said it all year, he is not the problem.
“He’s far from the problem. He’s someone I think you should be guiding, using and helping him develop people at the football club.”
Despite the cash incentives, Ronaldo’s future at Old Trafford remains uncertain despite him having 12 months left on his contract following this season’s conclusion.
However, the possible arrival of Erik Ten Hag may stop CR7 from having his head turned.