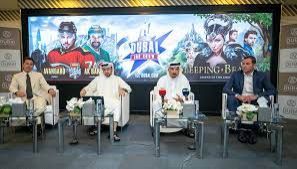 Dubai Sports Council (DSC) and the Emirates Hockey Federation have discussed ways to boost bilateral cooperation to develop hockey sport in the UAE.
The discussions were held during a meeting convened at DSC’s premises in the presence of Saeed Hareb, Secretary-General of DSC; Naser Aman Al-Rahma, Assistant Secretary-General of DSC; Abdulla Al-Dah, President of the Emirates Hockey Federation; Khalid Murad, Secretary-General of the Emirates Hockey Federation, along with a number of other officials.
Hareb confirmed DSC’s keenness to boost collaboration with sports corporations and national federations to develop sports in the UAE, based on the wise leadership’s vision to support and patronise the sector.
He stated, “The UAE enjoys distinguished abilities and well-based infrastructure which can be invested distinctively to create champions. We have qualified local staff to manage and develop the sports sector.”
The meeting dealt with ways of cooperation to popularise the culture of hockey sport in the UAE and to form a national team, which can represent the State in the sports fields. The meeting also discussed the possibilities of organising international hockey championships at Hamdan Sports Complex in collaboration with DSC.
After the meeting, Hareb accompanied the Federation’s delegation on tour around DSC’s premises and presented a detailed explanation on “Mohammed bin Rashid Al-Maktoum Creative Sports Award”. He briefed the delegation about the work process in DSC’s various departments, Innovation Lab, Press Conferences’ Centre and other sections of the Council.