Lens focus on PSG's weaknesses to inflict first defeat of the season - ednews.net

Paris Saint-Germain skipper Marquinhos on Monday urged his teammates to remain calm after a first Ligue 1 defeat of the season cut their lead to four points. Second-placed Lens overpowered the champions 3-1 on Sunday night with a display of attacking verve and gritty defence. 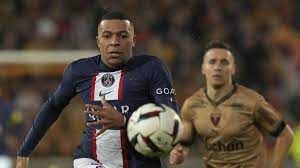 The hosts took an early lead after five minutes when a deflection from PSG keeper Gianluigi Donnarumma went to an unmarked Przemyslaw Frankowski, who volleyed the ball into the open net.
Hugo Ekitike equalised for PSG three minutes later. Lens striker Lois Openda restored his side's lead in the 28th minute and Alexis Claude-Maurice made it three for Lens two minutes into the second-half.
PSG were without Neymar - suspended following his red card against Strasbourg last Wednesday - and Lionel Messi who is recovering from his exertions at the World Cup in Qatar.
Shorn of such attacking acolytes, France international Kylian Mbappé failed to inspire his team.
"We shouldn't question everything," added Marquinhos.
A long way to go
"We had a good start to the season, we qualified for the knockout stages of the Champions League, we were unbeaten until this game.
"Lens are now only four points behind us but there's still a long way to go.
"The title's not going to be decided quite yet. The defeats always force you to look at how you are doing things."
PSG boss Christophe Galtier lamented his side's lack of organisation.
"We made far too many mistakes against a Lens side that deserved their victory," he added.
Lens coach Franck Haise celebrated his 100th game in charge by taking a microphone and singing a club anthem with the jubilant fans gathered at the Bollaert-Delelis stadium.
It was his side's ninth consecutive victory at home.
"This type of game proves that we can beat anyone," added Haise.