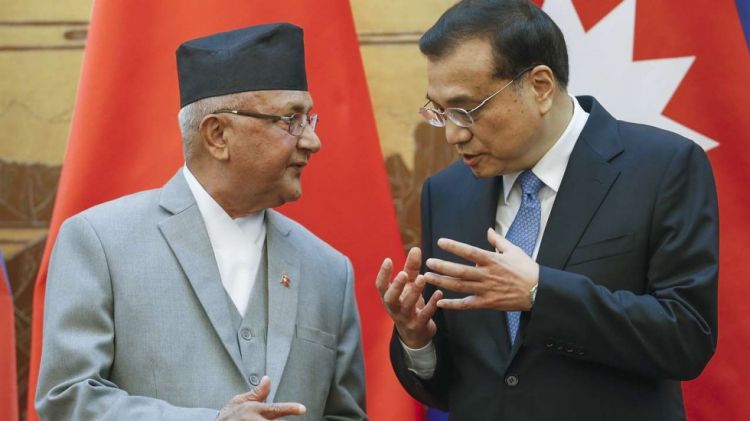 Nepal on Friday signed an agreement to be part of President Xi Jinping’s ambitious plan to build a new Silk Road linking Asia, Africa and Europe, a move that could alarm India, which jostles with China for influence in Kathmandu.

At a special function held at the Ministry of Foreign Affairs in Kathmandu, Foreign Secretary Shanker Das Bairagi, the ministry’s top bureaucrat, and Chinese Ambassador to Nepal Yu Hong inked the deal, the ministry said.

“This is Nepal joins China's ‘One Belt, One Road’ initiative, possibly alarming India,” said Foreign Minister Prakash Sharan Mahat, who witnessed the signing to bring the Himalayan nation into Beijing’s initiative to expand its economic and geopolitical heft across several continents.

The massive infrastructure project is commonly referred to as “One Belt, One Road”, short for Silk Road Economic Belt and 21st Century Maritime Silk Road.

Ministry spokesman Bharat Raj Paudyal said the main objective of the agreement is “to promote mutually beneficial cooperation between Nepal and China in various fields such as the economy, environment, technology and culture.”

The agreement targets boosting connectivity in areas such as transit, roads, railways, trade, aviation and power. Specific agreements on these areas are to be worked out later.

Deputy Prime Minister and Finance Minister Krishna Bahadur Mahara, who also witnessed the signing, is leaving for Beijing later Friday to participate in the two-day OBOR Conference there starting Sunday.

Although Nepal had made verbal commitments in the past to support OBOR, Friday’s signing officially translates that commitment to a binding agreement. Nepal’s Cabinet made a decision earlier this week to officially join the initiative.

Sandwiched between economic, military and geographic giants India and China, tiny Nepal relies heavily on imports from India and completely on Indian ports for sea access. Analysts in Nepal say the landlocked nation was under pressure from New Delhi to stay away from joining the initiative.

Nepal’s engagement with China at the people-to-people level as well as in trade and commerce is constrained by the impenetrable Himalayas.

However, Nepal and India share an open border that nationals of the two countries can cross without a visa. Nepal is culturally close to India and cross-border marriages are common.

India, which has traditionally enjoyed greater economic and political clout in Nepal, has faced increasing competition from China in recent years.

In September 2015, after Nepal adopted a constitution that was received frostily by New Delhi, India imposed a five-month-long trade blockade on Nepal ostensibly in support of agitation by Indian-origin Madhesi protesters in the country’s south.

The blockade proved to be a blessing for China as it pushed Nepal closer to its northern neighbour.

Faced with crippling shortages of fuel, cooking gas, and even medicine, the then coalition government led by nationalist communist leader Khadga Prasad Sharma Oli signed agreements with Beijing to secure sea access via Chinese ports and to import petroleum products from China, breaking India’s monopoly over Nepal’s fuel supplies and access to seaports.