Murderer of Soleimani killed in US plane downing in Afghanistan
Read: 2715

Special Assistant to the Speaker of the Iranian Parliament for International Affairs, Hossein Amir-Abdollahian, visited Damascus on Monday to hold talks with the top authorities of the Arab country on developing strategic ties 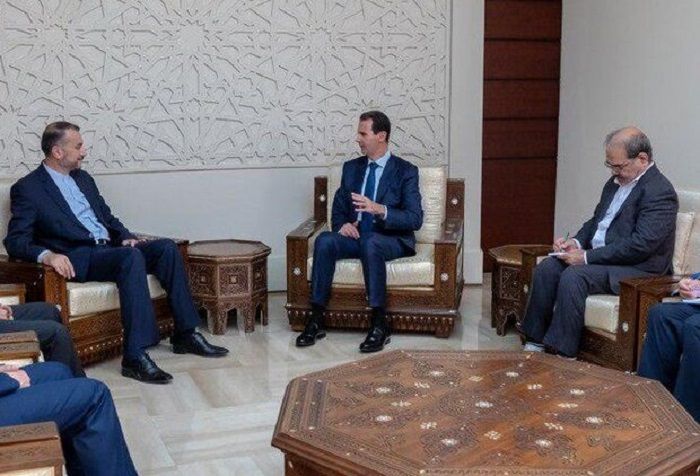 In a meeting with Syrian President Bashar al-Assad, the two sides discussed bilateral relations and the situation in the region as well as the developments regarding the Iranian nuclear issue and the steps undertaken by Tehran to protect the interests of the Iranian people, writes Mehr News Agency.

Referring to the US’ unilateralism and its hostile policies against Iran, Assad underlined his country's support to Iran against any threats by the US.

During the eight-year Syrian war, Iran has emerged as a key backer of the Syrian government in countering the foreign-backed terrorists.

Talks during the meetings dealt with the strategic relations between the two countries, underlining the importance of working on developing them continually and preserving the continued high-level coordination and consultation between the two brotherly countries.

The two sides also discussed the latest developments in the region and means to overcome the challenge facing the two countries, on top the siege and the coercive economic measures imposed by the US and its allies on the two nations in the interest of the Israeli regime in a way that is considered one of the forms of economic terrorism as viewpoints converged on all the discussed issues.

The Syrian officials thanked the “brotherly people of Iran and the Iranian leadership” for the continued support to Syria in the face of the terrorist war waged against it which threatens the security and stability in the region and the world, affirming that the victories achieved in Syria are victories for Syria and its allies.

Amir-Abdollahian, for his part, asserted that the Syrian-Iranian relations are deep-rooted and that the two countries are in the same trench, adding that the challenges and conspiracies targeting the two countries will only make the two brotherly peoples more determined to defend their rights in the face of the hegemony attempts which target the region as a whole.

He extended congratulations for the Syrian people on the political and field victories achieved under the leadership of President Bashar al-Assad, indicating that Syria’s steadfastness is considered as an example to follow.

President Rouhani 'ready to negotiate' with US if sanctions are removed