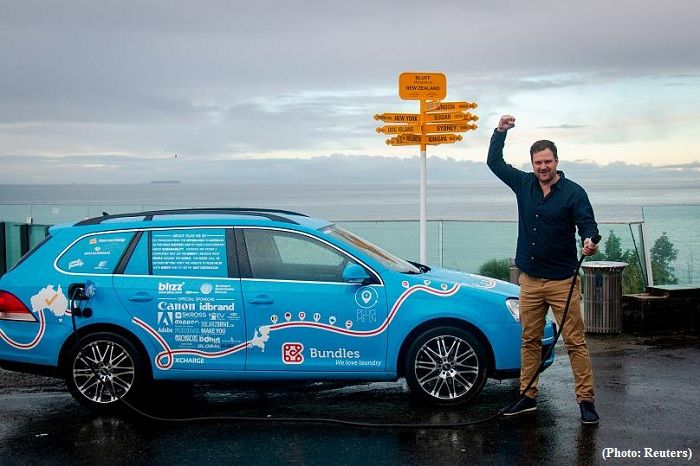 Some positive news in the world of sustainability today, as a Dutch man concludes a three year long electric road trip in New Zealand. The sustainability advocate, Wiebe Wakker, drove his electric car ‘Blue Bandit’ for thousands of miles across the world, to prove how powerful and reliable electric cars can be, Euronews writes.

Wakker’s road trip began in Europe, in the city of Amsterdam to be precise, and spanned thirty countries including Eastern Europe, Iran, India, Southeast Asia and Australia before reaching his final destination of New Zealand. The impressive journey covered 62,800 miles of ground, or 101,000 kilometres, during which time he documented it all through a blog and on social media, giving regular updates on his progress! Among the many memories Wakker will undoubtedly cherish, the Dutch hero cites his visit to Iran’s biggest car manufacturer in Tehran along the way and recalls his visit to the Australian outback and the Aboriginal sacred grounds of the Uluru.

Wiebe Wakker is giving Europe a good reputation when it comes to green transport, by using this trip to showcase the immense potential of electric cars. The whole trip was funded by donations he received in aid of the cause, ever since he set off initially in March 2016.

“I wanted to do my best to promote this technology and show that sustainability is a viable way of transport. I wanted to do something really that speaks to the imagination which is driving an electric car from Amsterdam to the other side of the world to show that it can be done.”

Over the course of the three years he spent on the road, Wakker relied on the care and support of complete strangers who were happy to help him out with a couch to sleep on and food to eat. He also had to find places to charge his car along the way, again helped by locals who welcomed him into their communities for the short time he was with them.

Wiebe Wakker is an inspiration to us all, having highlighted the durability of electric vehicles through his trip, and adds to the reputation of the many European cities leading the way in eco-friendly transport networks.