Protesters in Hong Kong take their grievances to the airport | Eurasia Diary - ednews.net

Armenia-Azerbaijan conflict must be resolved on the basis of the territorial integrity of Azerbaijan - President Ilham Aliyev
Read: 274

In 2018, Russia and Japan were closest to signing peace treaty
Read: 234

Protesters in Hong Kong take their grievances to the airport 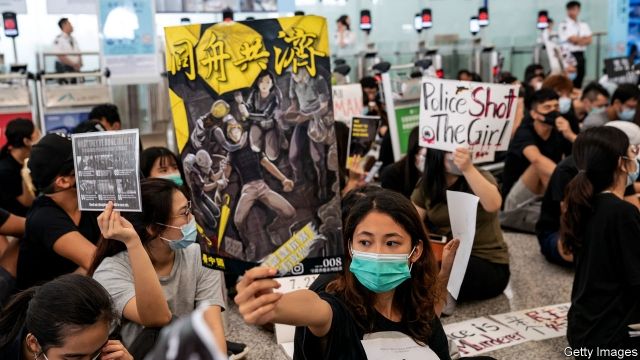 TEN weeks on, Hong Kong’s anti-government demonstrations have changed in nature, but show few signs of ending soon. Over the weekend, flash-mob style protests across the territory stretched the capabilities of an exhausted police, while leading to a sharp increase in violence employed by both sides. Protesters threw projectiles at police. On at least one occasion, a petrol bomb was hurled at the entrance to a police station. Police, in turn, have grown more ruthless, using methods that cause injury. Some have dressed like protesters, in black T-shirts and yellow hard-hats, and infiltrated crowds in order to catch and pin down those taking part in what they deem to be riots. Since August 5th police have used more tear gas and rubber bullets than in the previous two months put together. They are readier to fire at short range and even use tear gas in confined spaces with risks to the public, such as when chasing protesters into mass-transit stations and down the escalators.

It was the plight of one young woman, apparently shot in the eye with a bean-bag round during a demonstration on August 11th, that swiftly changed the dynamics of a separate protest at the international airport, originally planned to take place over three days. Over the weekend, the gathering had been calm and good-natured. Protesters shouted out “welcome to Hong Kong!” to travellers emerging through customs and plied them with leaflets about the pro-democracy cause. They apologised for the inconvenience to travellers, explaining that they were attempting to defend the kind of free and open Hong Kong that visitors like. Cheers echoed around the arrivals hall when travellers gave protesters the thumbs-up.