Myanmar rebels kill over a dozen in attack in Shan state 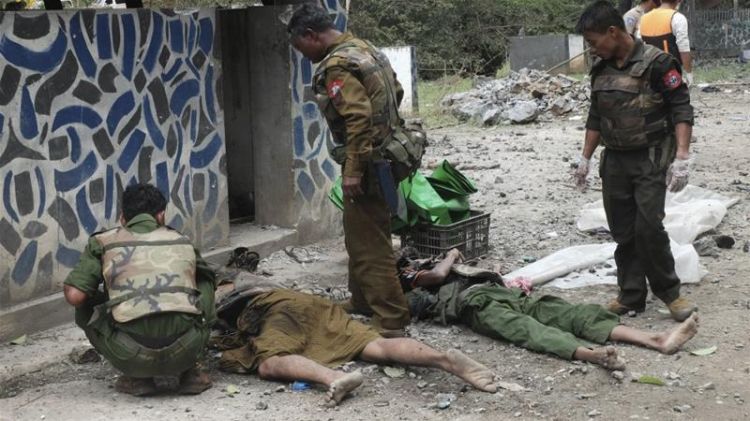 Ethnic armed fighters in Myanmar have killed at least 15 people, most of them members of the country's security forces, in attacks on an elite military college and other government targets in the country's north, an army spokesman said.
The Northern Alliance, a collection of armed groups in the region, claimed responsibility for the unprecedented attack on Thursday on the Defence Services Technological Academy in Pyin Oo Lwin in western Shan state, where army engineers are trained, and attacks at four other locations.
Army spokesman Tun Tun Nyi said soldiers were fighting armed rebels in Naung Cho township near the Gokteik viaduct, a towering railway bridge built under British colonial rule and a tourist hot-spot.
Another bridge across the Goktwin valley had been destroyed by rebels who also burned down the township's narcotics police office, he said.
Fighting was reported at a toll gate on the highway to Lashio, the largest town in Shan state.
"They killed seven military men in Goktwin, two at the toll gate, and policemen and civilians too," Tun Tun Nyi told Reuters news agency by phone, saying one civilian staff member at the military academy was killed.
Photos published by local media showed damaged buildings and burned cars riddled with bullet holes.
The attacks mark a major escalation in a decades-old conflict in the region, where several groups are fighting for greater autonomy for ethnic minorities.
Pyin Oo Lwin, a military town and former British hill station outside the city of Mandalay, had until Thursday been unaffected by clashes in the region, which have mostly taken place in rural areas.
A months-long ceasefire agreement that ended in June was recently extended until August 31. A spokesman for the Ta'ang National Liberation Army, one of the groups in the Northern Alliance, said it was responding to recent army action in ethnic areas.
"We aim to change battlefronts, as the Burmese military are increasing their offensives in ethnic areas during these days," spokesman Mong Aik Kyaw told Reuters by phone.
"The Aung San Suu Kyi-led ... government is trying to make peace, but nothing can happen if the military doesn't participate in it," he added.
The escalation in hostilities in Myanmar's fractured north is another setback for civilian leader Aung San Suu Kyi's bid to bring peace to the country amid a stuttering transition from full military rule.
The Nobel laureate came to power following a landslide election win in late 2016, promising to prioritise peace talks between ethnic armed groups, military and civilian government.
But the conflict has escalated in northern Kachin and Shan states as well as the western Rakhine region on the border with Bangladesh.
Most recently, government troops have been locked in fierce fighting in Rakhine state with armed rebels belonging to the Arakan Army, a group that recruits mostly from the Buddhist Rakhine majority in the area.
A spokesman for the Arakan Army, which is also part of the Northern Alliance, said its troops joined in Thursday's attacks.