'A nuclear option': Hong Kong and the threat of the emergency law - VIDEO | Eurasia Diary - ednews.net

PKK is preparing for being present in Karabakh conflict
Read: 295

Why are Arab countries closing to Israel? - The explaination by Turkish expert
Read: 230

'A nuclear option': Hong Kong and the threat of the emergency law - VIDEO

Analysts say use of draconian law that would allow censorship, arrest and deportation could push city into bigger crisis 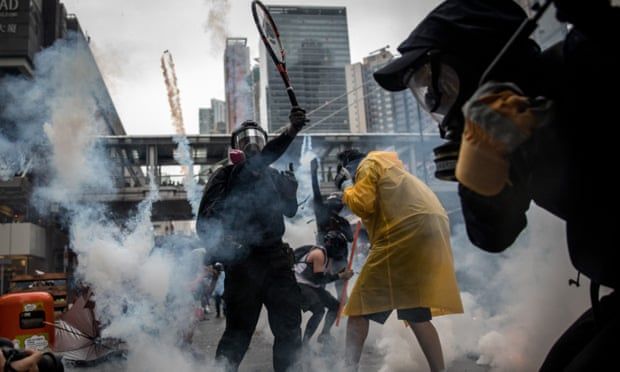 The Hong Kong government’s hint that it may use a draconian law to quell its biggest crisis in decades has sparked widespread concern, with analysts saying it would plunge the city into a worse crisis, The Guardian reports.

The city’s leader Carrie Lam said on Tuesday the government will use existing laws to “put a stop to violence and chaos”, after the pro-Beijing newspaper Sing Tao Daily said the government was considering invoking the Emergency Regulations Ordinance, a colonial era law with sweeping powers that was last used in 1967, to put an end to the current political crisis.

Another official, Edward Yan, the Secretary for Commerce and Economic Development, said he did not rule out the option, saying he believed the international community would understand and trade would be unaffected.

The South China Morning Post also quoted a government source on Wednesday saying the administration would not rule out the option.

The violent clashes between riot police and protesters last weekend were the fiercest yet since early June, when a wave of protests started in opposition to a now-suspended extradition bill under which individuals could be sent to mainland China for trial.
Police used water cannon for the first time on Sunday along with teargas and beatings as they fought running battles with protesters, who threw bricks and petrol bombs. Protesters have been demanding the complete withdrawal of the bill, the investigation of police use of force and free elections but Lam reiterated on Tuesday she would not give into their demands.
The Emergency Regulations Ordinance, introduced in 1922, grants the city’s leader sweeping powers to “make any regulations” he or she may consider in the public interest in situations considered “an occasion of emergency or public danger.”
These regulations will empower the government to impose a series of draconian measures, including censorship, control and suppression of publicationsand other means of communications, arrest, detention and deportation as well as the authorisation of the entry and search of premises and the taking of possession or control of any property.
Professor Michael Davis, a Global Fellow at the Woodrow Wilson International Centre and former law professor at the University of Hong Kong, called the law “a nuclear option” which “can literally run a dictatorship and suspend most rights.” He said it should only be used in a situation when “the life of a nation is under threat” and the current demonstrations, in which only a relatively small number of people are using aggressive tactics, do not pose such a threat.

“This nuclear option is not going to solve their problems, it’s going to enhance their problems,” he said.
Kenneth Chan, a political scientist at the Baptist University of Hong Kong, said it would be “a sign of weakness” for the government to use an antiquated law which had been considered obsolete after the Hong Kong Bill of Rights wa introduced in 1991.
“There will be fatal political and economic consequences that not all among the ruling elites in Hong Kong and Beijing are prepared to face,” he said.
“I think the international community will draw the conclusion that this idea puts Hong Kong to greater danger than the on-going protests because it sets the stage for the beginning of the end of the rule of law in Hong Kong and paves the way for direct rule from Beijing,” he said.
The threat to use arbitrary emergency powers to crush the anti-government movement “will only fuel public disdain and mobilise stronger support for the anti-government protests”, he said.