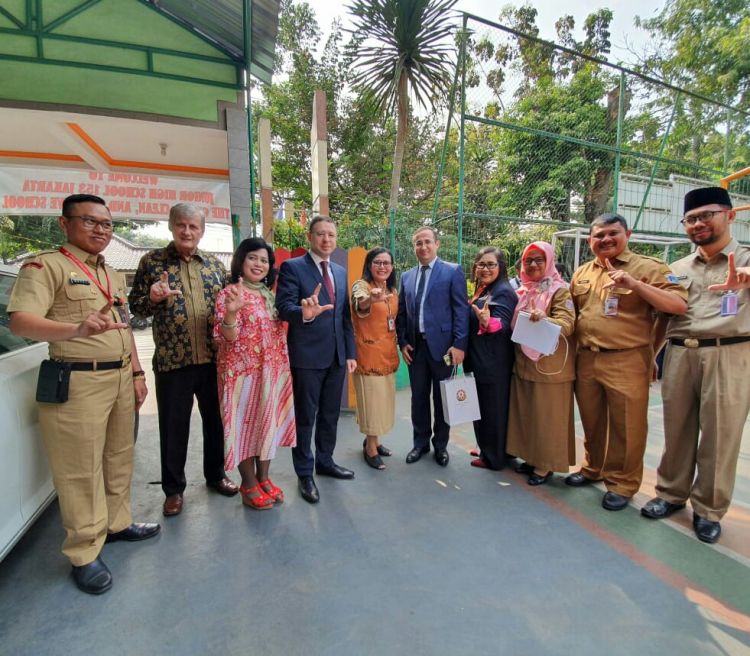 President Jokowi has declared that 2019 as a national literacy year, and each school is competing to carry out its literacy activities in its own way, as well as 153 Junior School in South Jakarta.

Dr. Saurmaida Gultom, M.Pd (52), who had just served as Principal for few weeks wanted to do something new from the literacy movement. Under the direction of Dr. Ester Sinambela, M.Pd, supervisor of the Ministry of National Education, and assisted by teachers and students, the school held a literacy event together with Ruslan Nasibov, Ambassador of Azerbaijan a.i. and Secretary II of the Azerbaijan Embassy in Jakarta, Emil Ahmadov, and education observers John Miller, Violin Milandra and Ananta Sabrina (Tuesday, 17/9).

All students welcomed their honor guests with great enthusiasm. They have gathered in the sports field in the middle of the school since 7 o'clock in the morning with the Red and White flag, the Azerbaijan flag and the American flag on their hands. This is the first time an ambassador comes to a school in the region of Pesanggrahan in South Jakarta. When the special vehicle marked with number CD 130 – 01 entered the school grounds at 9 am precisely, around 400 hundred students in their white blue uniform waving the small flags of the three countries and loudly shout Azerbaijan ... Azerbaijan ... Azerbaijan.

People can see clearly wonderful feelings and how proud were Saurmaida and the teachers who have prepared various events to welcome their honored guests. Saurmaida who used to perform music and songs on National TV back in decades, presented various kinds of musical performances and regional dances performed by students and teachers on that bright morning.

The literacy program on that day began with Ruslan Nasibov's presentation on education in schools in Azerbaijan. Ruslan explained that the Azerbaijani government under the leadership of President Ilham Aliyev was very concerned about the quality of education for the Azerbaijan people, especially early education. Ages 6 to 15 years are mandatory for all children in Azerbaijan to attend school. The average student in Azerbaijan can communicate in 4 languages ​​at the same time, Azeri as their mother tongue, then Russian, Turkish because of geographical proximity, and English which is an international language. Azerbaijan gave birth to many famous poets since the 12th century, and one of them was Nizami Ganjavi who is the only poet in the world whose name is enshrined as the name of one of the planets. Ruslan explained a little about the history of the State of Azerbaijan where the majority of the population is Muslim. Azerbajan had been part of the Republic of the Soviet Union but since 1991 became the sovereign Republic of Azerbaijan. Indonesia was the first country to support the independence of the Azerbaijan State.

When her turn came, Nia S Amira, a writer, poet, and also a journalist conveyed the message to students that literacy is important in human life and writing is more important than reading, because by writing someone will look for references for her/his writing material. Meanwhile, someone who likes to read may not necessarily like to write. According to Nia, a writer must think critically and what is called "critical thinking" has already existed even since 2500 years ago.

Faiz Maulana (14) a student from 9th grade asked Nia how to become a reliable journalist. It was explained that being a reliable journalist, not only armed with the science of journalism but also must have adequate foreign language knowledge, if necessary must master several foreign languages. Nia explained that she had started a career as a journalist since she was 13 when she was in junior high school and she received an honorarium because her writing about activities at her school and was published by one of the most well-known teenage magazines at that time. That morning literacy program ended with singing and taking pictures together and continued with hospitality from the head master and teachers. Each guest of honor is welcome to choose various artworks of the students, who 80% of them come from simple families but have high enthusiasm and aspirations to advance in the field of education. Some officials from Diknas, Province of Jakarta were present at the event; Dinyatip, Novel Heriyanto, and Zaini Hamdan delivered their messaged to encourage SMPN 153 to become one of the best schools in the region, while waiting for the new building that shall be built in a few months.

Dr. Ester Sinambela, M.Pd agreed that the literacy held by SMPN 153 together with the Ambassador of Azerbaijan could become a Pilot Project to promote the international insight of teachers and students in Special Province of Jakarta in advancing education at the national level towards the international level by synergizing, exchanging experiences between teachers and students, international level competitions held by friendly countries through their embassies in Indonesia, and other programs that support education, especially for the future of the nation's children.

Saurmaida, the teachers and students, all agreed with the slogan Together We Can, Together We Go Forward. We saw they were all fatigue, but we also saw their face were covered by happy smiles that they had successfully carried out the literacy program very well that day.