Peace, prosperity and stability in Azerbaijan is significant for the true realization of international projects and UN 2030 Agenda - Qaiser Nawab
Read: 730 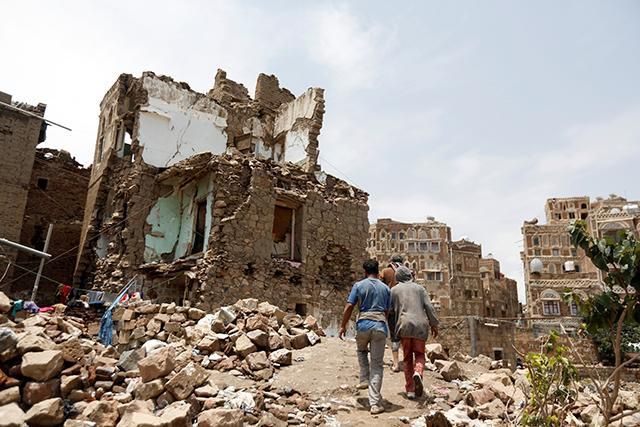 The increased US military support for Saudi actions in Yemen is part of a larger policy shift by Trump and his top advisers since he took office, in which Trump voices constant support for Saudi Arabia and perpetual criticism of its regional rival, Iran.

American complicity in the Yemen war goes beyond providing training and intelligence support, and selling billions of dollars in weapons to the UAE and Saudi Arabia, which has become Washington’s largest weapons buyer. The US is looking the other way while its allies commit war crimes and avoid responsibility for instigating the world’s worst humanitarian crisis.

Since Saudi Arabia and its allies intervened in war in March 2015, the United States gave its full support to a relentless air campaign  and bombs hit thousands of targets, including civilian sites and infrastructure, with impunity.

From the beginning, US officials insisted that American weapons, training and intelligence assistance would help the Saudis avoid causing even more civilian casualties.

But this was a lie meant to obscure one of the least understood aspects of US support for Saudi Arabia and its allies in Yemen: it’s not that Saudi-led forces don’t know how to use American-made weapons or need help in choosing targets.

They have deliberately targeted civilians and Yemen’s infrastructure since the war’s early days – and US officials have recognized this since at least 2016 and done nothing .

Trump has offered virtually unqualified support for Saudi leaders, especially  Mohammed bin Salman, who is the architect of the disastrous war in Yemen.

During his visit to Riyadh, Trump announced a series of weapons sales to the kingdom that will total nearly $110bn over 10 years. Trump, along with Jared Kushner, his son-in-law and senior adviser, who played a major role in negotiating parts of the agreement, were quick to claim credit for a massive arms deal that would boost the US economy.

But many of the weapons that the Saudis plan to buy – including dozens of F-15 fighter jets, Patriot missile-defense systems, Apache attack helicopters, hundreds of armored vehicles and thousands of bombs and missiles – were already approved by Obama.

Trump is escalating US military involvement in Yemen without pushing for a political settlement to the Saudi-led war. His total support for Saudi Arabia and its allies is making the world’s worst humanitarian crisis even more severe.

In late 2017, after the Yemeni army fired ballistic missiles at several Saudi cities, the Pentagon secretly sent US special forces to the Saudi-Yemen border, to help the Saudi military .

While US troops did not cross into Yemen to directly fight Yemen’s people, the clandestine mission escalated US participation in a war that has dragged on since Saudi Arabia and its allies began bombing the Houthis in March 2015.

The war has killed at least 10,000 Yemenis and left more than 22 million people –three-quarters of Yemen’s population – in need of humanitarian aid. At least 8 million Yemenis are on the brink of famine, and 1 million are infected with cholera.

The United Nations Development Programme issued a report warning that the death toll in Yemen could rise to 233,000 by the end of 2019 – far higher than previous estimates. That projection includes deaths from combat as well as 131,000 indirect deaths due to the lack of food, health crises such as a cholera epidemic, and damage to Yemen’s infrastructure.

A member of the Supreme Political Council Mohammed Ali al-Houthi said affirmed that the United States should surprise the world by changing its aggressive policy, which made of itself the world’s discontent and loss, as Trump talked that they lost because of their wrong decision.

Al-Houthi added “It would be better for Trump, his administration, to send out plans for joint coexistence, equal citizenship and democracy, instead of sending more thousands of US military personnel and war and destruction for their allies or free people to the Middle East region.”

Al-Houthi said that the US officials should have told the US people – even once – that they learned the war lesson from Vietnam, Iraq or in Yemen, and that their wars did not any results.

He added the US administration should confront the American people with the fact that everyone knows that increasing the number of its troops does not mean victory.

Al-Houth, addressing the US president and his administration, said, “Our Yemeni people, who not are intimidated by your former forces, your weapons and your leadership of aggression, which proved that the US kills the Yemeni people.”

Despite years of warnings from groups like Human Rights Watch and UN investigations that documented growing evidence of war crimes in Yemen, US officials – first under Barack Obama’s administration and then under Trump – continued to approve weapons sales to the Saudi and Emirati militaries.

Despite the mounting evidence of war crimes, Trump still firmly supports Mohammed bin Salman, the ruthless Saudi crown prince who is an architect of the Yemen war. Since April, Trump has used his veto power four times to prevent Congress from withdrawing US military support and ending weapons sales to Saudi Arabia and its allies.

Congress could not muster enough votes to override Trump’s vetoes.

The latest UN investigation, which found the US is likely complicit in war crimes, should give new momentum to the majority in Congress that wants to end American involvement in a disastrous conflict.