Peace, prosperity and stability in Azerbaijan is significant for the true realization of international projects and UN 2030 Agenda - Qaiser Nawab
Read: 1028

'Time for Georgia to Become a Full Member of NATO' - US Congressman
Read: 606

Esper says US troop levels in Afghanistan to go below 5,000 by end of November
Read: 605 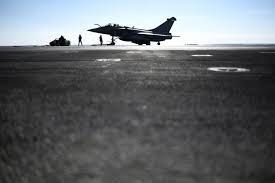 Last week, the RDIF head said that one of the deals, which will be signed during the visit, would be worth US$700 million, but did not specify any details.

"(This will be a deal) in the area of aircraft leasing. This is one deal worth US$700 million ... It will be one of the largest deals," Dmitriev told reporters.

He added that many deals, related to railways, were also set to be signed in Riyadh on Monday.

"There will also be a deal in the area of petrochemistry, with [Saudi Arabia's] Sabic, but not with [Russia's] Sibur," Dmitriev noted.

Putin is scheduled to visit Saudi Arabia on Monday. According to Kremlin aide Yury Ushakov, the agenda of the visit will include talks with the Saudi top officials with a focus on Syria, Yemen and the situation in the Persian Gulf, as well as the bilateral cooperation in defence and energy sector.