2750 tonnes of ammonium nitrate stored at Beirut warehouse at centre of explosion
Read: 695 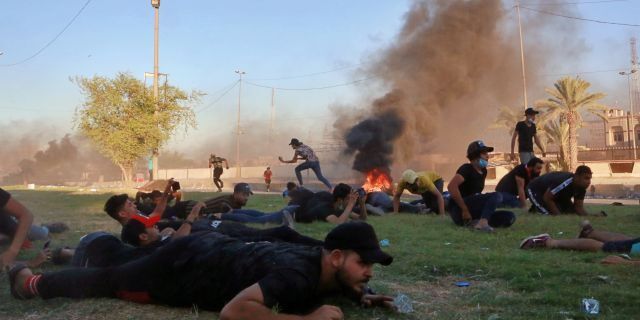 Iran-backed militias deployed snipers on Baghdad rooftops during the Iraq’s deadliest anti-government protests in years, two Iraqi security officials told Reuters.
The deployment of militia fighters, which has not been previously reported, underscores the chaotic nature of Iraqi politics amid mass protests that led to more than 100 deaths and 6,000 injuries during the week starting Oct. 1. Such militias have become a fixture here with Iran's rising influence. They sometimes operate in conjunction with Iraqi security forces but they retain their own command structures.
The Iraqi security sources told Reuters that the leaders of Iran-aligned militias decided on their own to help put down the mass protests against the government of Iraqi Prime Minister Adel Abdul Mahdi, whose one-year-old administration is backed by powerful Iran-backed armed groups and political factions.
“We have confirmed evidence that the snipers were elements of militias reporting directly to their commander instead of the chief commander of the armed forces,” said one of the Iraqi security sources. “They belong to a group that is very close to the Iranians.”
A second Iraqi security source, who attended daily government security briefings, said militia men clad in black shot protesters on the third day of unrest, when the death toll soared to more than 50 from about half a dozen. The fighters were directed by Abu Zainab al-Lami, head of security for the Hashid, a grouping of mostly Shi’ite Muslim paramilitaries backed by Iran, the second source said. The Hashid leader was tasked with quashing the protests by a group of other senior militia commanders, the source said. The sources did not say how many snipers were deployed by militia groups.
A spokesman for the Hashid, Ahmed al-Assadi, denied the groups took part in the crackdown. “No members were present in the protest areas. None of the elements of the Hashid took part in confronting protesters,” al-Assadi said in a statement to Reuters.
Iraqi Interior Ministry spokesman Saad Maal said state security forces did not fire directly at protesters and blamed unnamed “vicious” shooters for the mass deaths and injuries. The government has opened an investigation to determine who shot the protesters and who ordered it, Maal said in a news conference on Oct. 6.
The assertion that security forces did not participate in the violence seemed to contradict an earlier statement on Oct. 14 from the Iraqi government, which admitted state security forces had used excessive force and promised to hold individuals accountable for violence against civilians.
An official with the prime minister’s office said in a statement to Reuters Wednesday that it would be “premature to lay the blame on any parties, whether from Hashid or other security forces, before we end the investigation. Let’s wait and see who gave the order ‘shoot to kill.’
Iran’s role in responding to the demonstrations was another reminder of Tehran’s reach in Iraq, where a sizable number of former militia commanders are now members of parliament and support the Iranian agenda. Stability of the Iraqi government is in the best interests of Iran, which has been steadily amassing influence in Iraq since 2003, when the U.S.-led invasion toppled the Islamic Republic’s arch-enemy Saddam Hussein. Iran is Iraq’s biggest trading partner.
Iran's delegation to the United Nations did not immediately respond Wednesday afternoon to questions from Reuters about its support of militias and their involvement in the violence against protesters. Leaders of militias in Iraq have denied getting training and weapons from Iran.