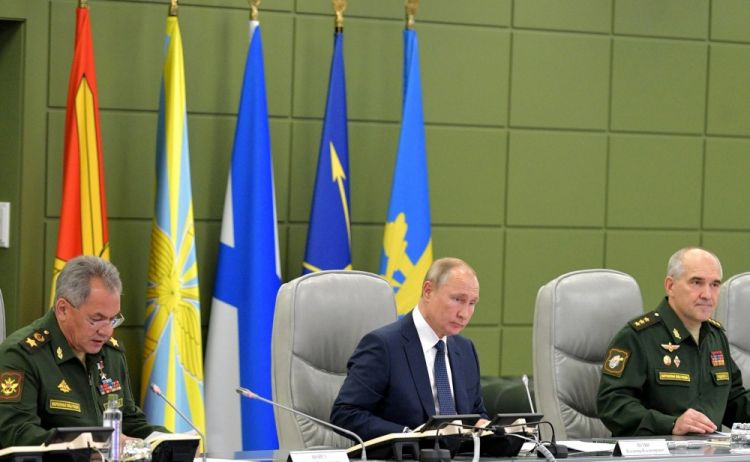 Two Kalibr cruise missiles that can carry nuclear warheads were launched from the Barents Sea on Thursday as part of the Grom-2019 exercise.

Two Kalibr cruise missiles that can carry nuclear warheads were launched from the Barents Sea on Thursday as part of the Grom-2019 exercise.
Cruise missiles are not part of the US-Russian New START Treaty that limits the numbers of strategic nuclear warheads. However, Russia’s newer guided cruise missiles deployed during the latest years have much higher precision and longer range, and thus play a stronger role in Moscow’s strategic nuclear weapons planning.
So also in the latest exercise taking place across Russia on Thursday.
Kalibr cruise missiles were launched from both the «Severodvinsk» multi-purpose submarine and the new frigate «Admiral Gorskhov» both sailing the Barents Sea at the time of exercise, Kremlin’s military TV channel Zvezda reports.
A Kalibr cruise missile was also launched from a navy ship in the Caspian Sea.
Since tactical nuclear weapons are not included in any international arms treaties, their number is largely unknown, but experts believe Russia still has between 1,000 and 6,000 warheads for nonstrategic nuclear weapons in its arsenal, of which the majority are in central storages and not deployed on missiles.
The Barents Observer has previously published an overview of the different storage locations for strategic and nonstrategic nuclear weapons on the Kola Peninsula.
As expected, the Gorm (Thunder) exercise included launching of both submarine and land-based ballistic missiles.
From the Barents Sea, the Northern Fleet’s Delta-IV class submarine «Karelia» launched a Sineva missil targeted at the Kura test range at Kamchatka Peninsula.
A Yars ballistic missile was launched from Plesetsk in the Arkhangelsk region. Also this one crossed the skies in the Arctic and hit the target at the Kura range.
The Pacific Fleet Delta-III sub «Bryansk» launched a missile the other way that hit its target at the Chizha range on Capa Kanin on the Barents Sea coast in Arkhangelsk region.
Cruise missiles were launched from Tu-95 strategic bombers against targets at the Pemboy range near Vorkuta in the Komi Republic. How many cruise missiles that were launched from aircraft is not known, but Tsar Grad news site claims a total of 16 cruise- and ballistic missiles were launched during the exercise.
A Iskander cruise missile was launched from the central test range Kapustin Yar in Astrakhan Oblast, another video posted by TV Zvezda shows.
The Kremlin says about 12 thousand military personnel, 213 missile launchers of the Strategic Missile Forces, up to 105 aircraft, up to 15 surface ships and 5 submarines, 310 units of military and special equipment are involved in the exercises.