Peace, prosperity and stability in Azerbaijan is significant for the true realization of international projects and UN 2030 Agenda - Qaiser Nawab
Read: 923 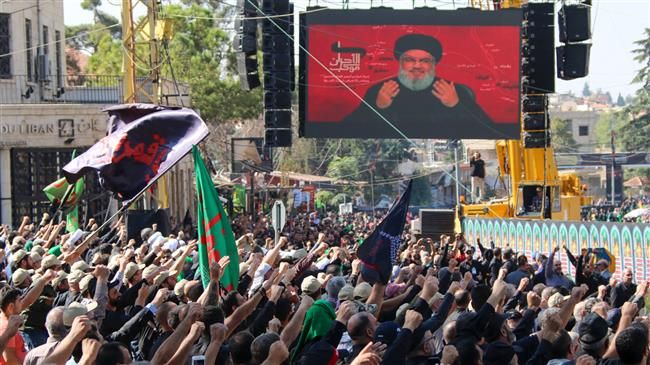 Secretary General of the Lebanese Hezbollah resistance movement Sayyed Hassan Nasrallah has expressed opposition to calls for the resignation of Lebanon’s government, vowing not to allow anyone to “burn” Lebanon and cause chaos in the country.

Speaking on Saturday following days of protest rallies across Lebanon, Nasrallah expressed solidarity for recent economic and anti-corruption demonstrations in the country, saying that the Hezbollah party is “determined to work hard” to solve the country’s problems and “not allow anyone to drown this country and take it to the abyss”.

Nasrallah explained that the problems in the country were “systematic” and would not be fixed by a change of government, given that the new government would most probably include the same combination of already existing political factions.

The Hezbollah chief denounced certain political figures who had been quick to call for a new government, saying that such a thing was only a “waste of time” and that it would take a year or two for the new cabinet to take shape.

Nasrallah added that such initiatives were being proposed by factions seeking to evade their responsibilities instead of resolving Lebanon’s hardships.

The Hezbollah chief also lauded the demonstrations for being “spontaneous” and independent from any foreign or domestic political influence, warning participants to beware of the rallies being hijacked by political groups.

Nasrallah also called for a “new spirit” in resolving the country’s problems which he described as a “problem of confidence” between the government and the populace.

He added that the party will avoid intervening in street protests as it seeks to resolve the matter through legal means.

Nonetheless, Nasrallah warned that if taxes were to be imposed on the poor or other necessities were to arise, the party would act.

We will “be everywhere” and we will “change the balance” in the country, Nasrallah said.

The Hezbollah chief’s remarks come against the backdrop of three days of ongoing nationwide protests born out of frustration over new taxes being examined as part of the country’s 2020 budget.

The Lebanese army has also been deployed to control the demonstrations. The troops opened a number of major highways that had been blocked by the protesters.