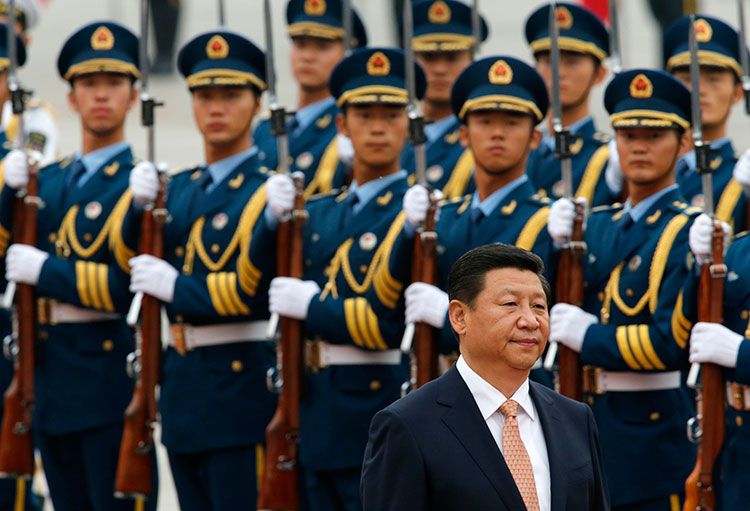 Japan should do more to alert its public of the growing military threat from China and rethink its rejection of offensive weapons, a senior U.S. military officer said in Tokyo.
There needs to be a discussion between the government of Japan and the public about the threats that are out there, said the officer, who spoke Monday to reporters on condition of anonymity. The officer cited China as a particular risk.
The pacifism built into Japan’s U.S.-drafted, post-World War II constitution means that attempts to bolster defenses frequently face opposition from local residents, even as China and North Korea build up their arsenals of ballistic missiles. Japan, which hosts about 50,000 U.S. military personnel, also places tighter constraints on training than other countries, the officer said.
Japanese Prime Minister Shinzo Abe has increased the defense budget and sought to loosen the constraints of the war-renouncing constitution since taking office in 2012. But repairing ties with China, Japan’s biggest trade partner, has also been a priority for his administration.
The U.S. officer said China has spent heavily to bolster its ballistic missile force, which has rapidly expanded over the years. China continues to say publicly that it backs peace, stability and security, but its actions don’t match its words as it builds a weapons inventory that threatens Japan as well as others in the region, the officer added.
Chinese President Xi Jinping rolled out some of the country’s most advanced weaponry in an Oct. 1 parade marking the 70th anniversary of the People’s Republic — a grand demonstration of the country’s growing challenge to U.S. military might.
China’s Advanced Weaponry on Parade Sends a Message to the U.S.
Japan’s avoidance of offensive weaponry under its constitution is no longer acceptable and should be another topic of discussion with the public, the officer said.
Restrictions on training, such as access to ranges or permission to fly at low altitude or at night, are affecting the ability of both U.S. forces and Japan’s own Self-Defense Forces to prepare for contingencies, the U.S. officer said, adding that Japan should debate the issue soon.