The victims include four foreign tourists and their tour guide. 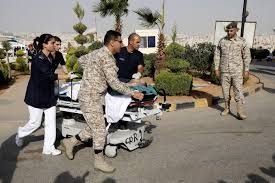 A lone attacker on Wednesday stabbed eight people, including four foreign tourists and their tour guide, at a popular archaeological site in northern Jordan, Eurasia Diary reports citing nbc news.
The incident occurred at Jerash, one of the country's top tourist destinations. The reports quoted an unnamed security official as saying the wounded included three Mexican tourists and a Swiss woman. Along with the tour guide, three other Jordanians, including a policeman, were also hurt before the attacker was subdued and arrested, reports said.
Details on their conditions were not immediately known, but two people reportedly in critical condition were airlifted to a hospital in the capital, Amman, by helicopter. Jerash is roughly 60 kilometers (40 miles) north of the capital.
Mexican and Swiss authorities did not immediately say anything about the attack in Jordan.
Amateur video showed a bloody scene next to the Jerash archaeological site, an ancient city whose ruins include a Roman amphitheater and a columned road.
In one video, a woman can be heard screaming in Spanish. "It's a dagger, it's a dagger, there is a knife. Please, help him now!"
One woman is seen lying on the ground, with much blood around her, as someone presses a towel to her back. Another man sits nearby with an apparent leg wound.