daily news
Former US Amb. to Azerbaijan: 'Presence of Turkish troops...means incredible geopolitical balance'
Erdogan tells Putin that Nagorno-Karabakh ceasefire could include other countries
"Hated enemy cut down, looted and sold trees" - Azerbaijani President
Azerbaijan has taken the necessary steps to restore its territorial integrity" - Ilham Aliyev
Erdogan says Armenia should not evade responsibilities in Nagorno-Karabakh deal
Leaders of religious confessions in Azerbaijan issued a joint statement on the destruction of our religious monuments in Karabakh.
All civilized people should see Armenian disgraceful treatment of mosques as barbarism - Irish historian
Any result that acceptable for Azerbaijan - acceptable for Turkey too - FM
﻿

Every Armenian resident of Karabakh will have to take a written oath of allegiance to Azerbaijan - Expert
Read: 376

"According to international law, Nagorno-Karabakh and its territory have been and still are a part of the Republic of Azerbaijan" - Putin
Read: 303

Coronavirus is not a flu, it is a dangerous virus, and hygiene and distance must be observed - Zaur Orucov - VIDEO
Read: 295

"The destruction of the city of Fuzuli is a clear example of Armenian vandalism and savagery against Azerbaijan and the Azerbaijani people" - Erkan Ozoral
Read: 260 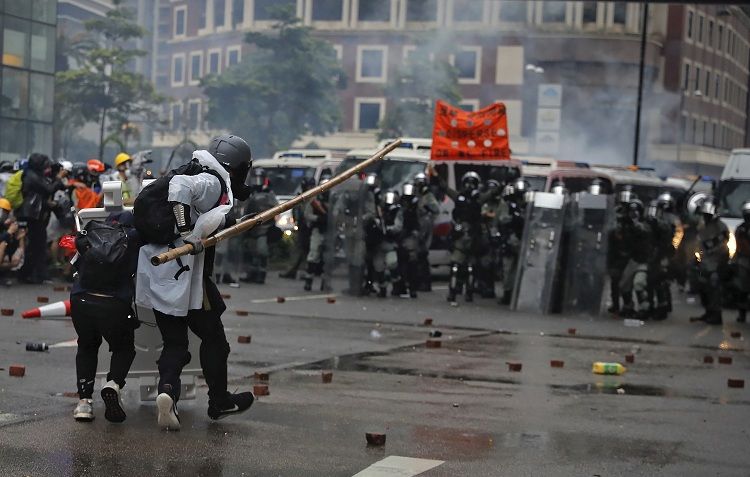 Police fired live rounds at protesters on the eastern side of Hong Kong island, Cable TV and other Hong Kong media reported. Cable TV said one protester was wounded when police opened fire.

Video footage showed a protester lying in a pool of blood with his eyes wide open. Police also pepper-sprayed and subdued a woman nearby as plastic crates were thrown at officers, the video shared on social media showed.

The Hospital Authority told Reuters a 21-year-old man suspected to have been wounded during the incident in Sai Wan Ho was admitted to hospital on Monday and was undergoing an operation.

Cable TV reported the unidentified protester was in a critical condition.

Police said in a statement radical protesters had set up barricades at multiple locations across the city and warned the demonstrators to “stop their illegal acts immediately”.

They did not comment immediately on the apparent shooting.