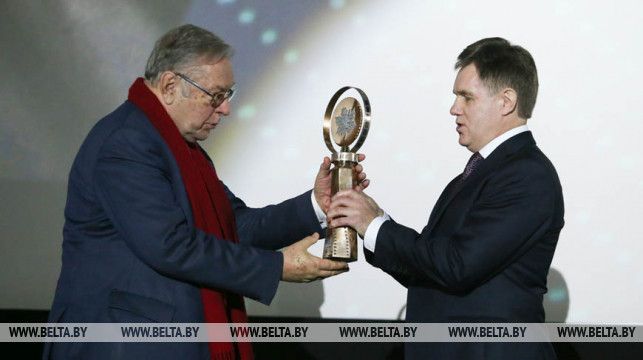 The special prize of the Belarusian president for preserving and promoting spiritual traditions in cinematography was awarded to Polish film director, screenwriter, and producer Krzysztof Zanussi. The prize was presented by Belarus Deputy Prime Minister Igor Petrishenko during an awards ceremony of the Listapad International Film Festival in the Moskva movie theater in Minsk on 8 November, Eurasia Diary reports citing Belta.

Krzysztof Zanussi was a special guest of the festival. The Pioner movie theater in Minsk hosted a screening of his new film Ether.

“This is not my first time at Listapad. I see that the festival does not only continue but also gains steam. Everyone is having a good time, smiling, which means the festival is good,” Krzysztof Zanussi said.

According to him, the Belarusian film industry has its distinctive character. “Belarusian films won awards in almost all categories, which means we, the jury, liked them,” Krzysztof Zanussi noted. The 26th Minsk International Film Festival Listapad was held on 1-8 November 2019 under the slogan “To Joy”.

The program of this year's festival included more than 150 films from 50 countries. It featured films from Sudan and Senegal for the first time. The founders of the festival are the Belarusian Culture Ministry and the Minsk City Hall. The ART Corporation center of visual and performing arts is the organizer of the event.