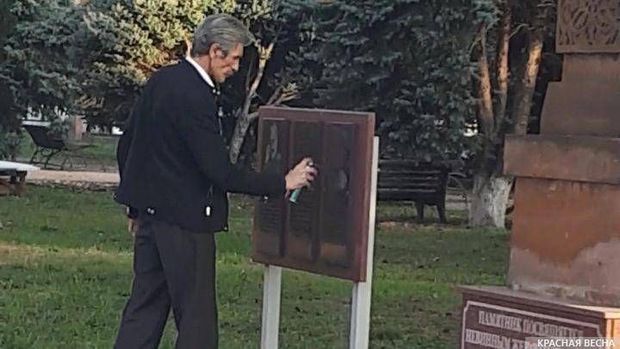 The memorial plaque to the Nazi accomplice Garegin Ter-Harutyunyan (Nzhdeh), laid in the city of Armavir, is painted over with black paint, Eurasia Diary reports citing Army.az.

It was announced by Deputy of the Armavir City Council Alexey Vinogradov to correspondents on November 12.

On November 11, a two-week period expired, during the regional and local authority term, as well as representatives of the local branch of the Union of Armenians of Russia, promised to dismantle the memorial plaque to the organizer of the Armenian SS Legion Garegin Nzhdeh.

Earlier, deputy Vinogradov has repeatedly stated that in case of failure to fulfill promises to dismantle the board, he will independently resolve this issue.

As a result of the inaction of the regional and local authorities, as well as the prosecution authorities, the board remained in its original place.

The deputy Vinogradov did not put up with this state of things and expressed his active citizenship by painting over the memorial plaque of Garegin Nzhdeh with black paint.

“The erection of monuments to those who have become soiled in cooperation with the Third Reich is an insult to the people who fought against the Nazi invaders. If Garegin Nzhdeh is a hero, then who are those who builds memorial plaques for him? ”said Vinogradov.

It should be noted that in 2017 several caring residents of Armavir sent a collective application to local authorities, law enforcement agencies and prosecutor's offices with a request to dismantle a memorial plaque to Garegin Ter-Harutyunyan (Nzhdeh) laid in the city of Armavir.

According to the results of the appeal, answers were received that essentially did not solve anything. The applicants' claims were not satisfied.

It should be noted that Garegin Nzhdeh during the Great Patriotic War took part in the formation of the Armenian SS Legion, which units were involved in battles against the Soviet Army in the North Caucasus, and later on the Western Front.

In 1948, Nzhdeh was convicted by the Special Conference of the Ministry of State Security of the USSR for anti-Soviet activities and aiding Nazi Germany and sentenced to 25 years in prison.

But in 2012, a memorial plaque to Garegin Ter-Harutyunyan (Nzhdeh) was laid on the territory of the Church of the Assumption of the Blessed Virgin Mary of the Armenian Apostolic Church in Armavir.