Azerbaijan has right to use its armed forces to take back its legally acknowledged territory - British journalist
Read: 4120 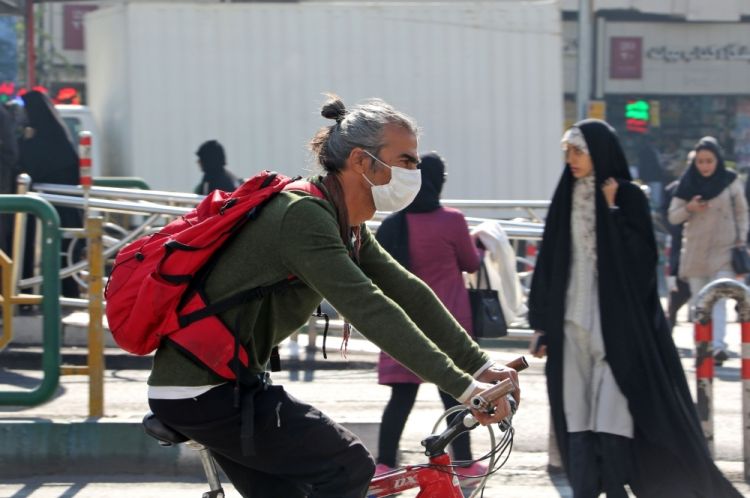 Iranians wear masks to help guard against dangerous levels of air pollution as they walk in the center of the smog-filled capital Tehran, Eurasia Diary reporst citing Radio Fardah.
Iran's capital Tehran has been blanketed by heavy smug this week, forcing schools to shut down and hospitals have admitted many more cases of heart and respiratory emergencies.
The head of Environment and Sustainable Development at Municipality of Tehran says air pollution costs the capital of Iran up to $2.6 billion per year. But other major cities, specially in the south also suffer from periodic heavy air pollution.
The main culprits are vehicles that produce 70%-80% of the pollutants, Shina Ansari disclosed on Wednesday, November 13.
The level of pollution in Tehran was so alarming on Wednesday that schools were forced to shut down.
Earlier on Monday, Majles (parliament) Research Center (MRC) had also cited the World Bank as saying that "the cost of air pollution in Tehran is $2.6 billion per year." However, the MRC report published on its official website has insisted, "The estimate only considers human health effects, and therefore underestimates the total economic cost from air pollution."
The total economic damage from air pollution, the report maintains, would be much higher if other impacts, including reduced agricultural productivity, reduced visibility; long-term damage to cultural sites and infrastructure; reduced quality of life; and education-days lost because of closed schools, are accounted for."
Meanwhile, the report has suggested that all non-standard and old vehicles should be taken off the streets of Tehran to rein in the pollutants.
"Nonetheless, more than 2.6 million below Euro 4 standards sedans are currently moving around the capital city," the report says.
After years of economic sanctions and an economy largely closed to international markets, Iran suffers from an outdated vehicle fleet. Locally produced cars are replicas of older foreign models and imports of new vehicles are heavily taxed.
Nearly 72% of vehicles in Tehran are sedans, 2% taxis, 18% motorbikes, 5.5% pickups, 2% trucks, and almost half a percent buses and mini-busses.
According to the last research about the relationship between vehicles and air pollution in Iran, "726,000 tons of pollutants are produced in Tehran every year, out of which 85% by vehicles," the 2013 research noted.
However, the data presented by the report are gravely dubious, since the real volume of pollutant gases in the Iranian capital city is much higher. International entities have estimated that Iran produces more than 670 million tons of Carbon Dioxide each year. Therefore, it is highly unacceptable to say that Tehran has only a 1% share in producing pollutants in the country.
A report by World Bank published in April 2018, says, "There are more than 17 million vehicular trips per day in Tehran, and many of the vehicles have outdated technology. Thus, the air in Tehran is amongst the most polluted in the world."
As a rule, the Islamic Republic authorities are not serious in tackling the problem of deadly air pollution, critics say.
Tehran's Mayor, Pirouz Hanachi, echoed the critics' voice last Tuesday by saying, "Tehran's only way out of the current crisis is to hope for Mother nature's assistance," adding, "If the wind were to blow our way, the situation would improve."
Furthermore, government orders concerning air pollution are frequently disregarded.
As recently as last Monday, President Hassan Rouhani's Administration banned trucks from entering Tehran. Nevertheless, it took two days for the traffic police to execute the order.