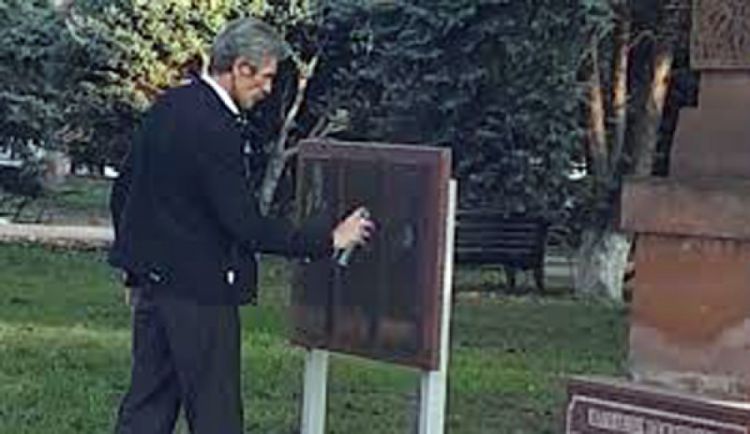 The installation of the plaque and glorification of the Armenian Nazi executioner drew public discontent and criticism in the city.

During the World War 2 Nzhdeh assisted the so-called Armenian SS Legion, whose units were involved in battles against the Soviet Army in the North Caucasus, and later on the Western Front. Nzhdeh also participated in the Holocaust of the Jewish population of Europe. His main slogan was "He who dies for Germany dies for Armenia". In 1948, Nzhdeh was convicted by the Special Council of the Ministry of State Security of the USSR for anti-Soviet activities and aiding Nazi Germany and sentenced to 25 years of imprisonment.

President of Azerbaijan Ilham Aliyev condemned the glorification of Nzhdeh at a session of the CIS Heads of State Council in Ashgabat. The head of state said that there was no place for the glorification of fascism in the CIS. "We, the heads of state, have repeatedly opposed the glorification of the Nazis. Unfortunately, this is happening in the CIS, in particular in Armenia, where former authorities erected a monument to fascist executioner and traitor Garegin Ter-Harutyunyan, who served German fascists under the nickname of Garegin Nzhdeh, in the center of Yerevan. Many war veterans from CIS countries have repeatedly expressed vehement protest at this cynical step of the previous leadership of Armenia. In May 2019, the Russian Ministry of Foreign Affairs issued a report “On the situation with the glorification of Nazism, the spread of neo-Nazism and other practices that contribute to the escalation of modern forms of racism, racial discrimination, xenophobia and related intolerance”, which states that “the former ruling Republican party of Armenia took steps to perpetuate the memory of such an ambiguous nationalist politician as Garegin Nzhdeh, for whom there is information on his collaboration with the Third Reich.” This is the position of the Russian Foreign Ministry," President Ilham Aliyev said. The Azerbaijani President`s speech resonated widely.

Earlier this month member of the Armavir City Duma Alexey Vinogradov painted the memorial board to the Armenian Nazi executioner with black paint.