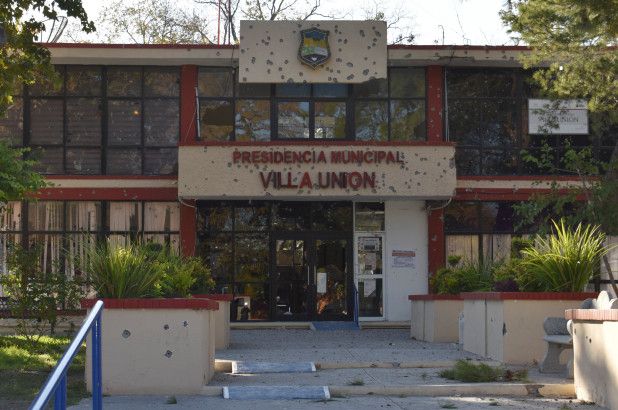 The violence began at noon Saturday when a convoy of cartel trucks stormed into the city of Villa Union in the state of Coahuila, an hour south of the Texas border, and opened fire on the municipal building, which houses the mayor’s office.

The move prompted an hourlong gunfight between the cartel and security forces — with photos of the aftermath showing the town hall (above) and a pickup truck with Texas plates riddled with bullet holes. On the driver’s side door are the letters CDN — from the Spanish for Cartel of the Northeast.

Four officers and 10 gunmen were killed in the initial exchange of gunfire, with the other seven cartel members gunned down Sunday by Mexican officers who pursued the convoy after its members fled the city, officials said.

Miguel Ángel Riquelme Solís, the governor of Coahuila, told reporters Sunday that the government reacted “decisively” to the attack. He toured the scene, looking at police vehicles left riddled with bullet holes in the assault.

State officials said forces were deployed “by land and air, so as not to let the cowardly attack go unpunished,” according to a statement released by Coahuila Sunday.