Russian ship Sevastopol with 12 Russians seized in Singapore due to US sanctions | Eurasia Diary - ednews.net 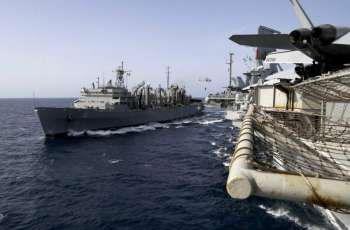 The authorities of the port of Singapore have seized Russian ship Sevastopol with 12 Russian crewmen for debts caused by US sanctions and want to obtain court permission to sell it, deputy general director of shipowner Gudzon, Oleg Anikin, said, Eurasia Diary reports citing Sputnik.
In August 2018, the United States added two Russian companies, including Gudzon, and six vessels, including the Sevastopol, to the list of sanctions related to North Korea.
The US Treasury Department claimed that the vessels on the list had allegedly participated in the delivery of refined petroleum products to North Korea, which, presumably, were pumped from Russian to North Korean vessels in high seas. The company refutes evidence of involvement in these deliveries.
"When the ship came to Singapore, our auxiliary engines broke down. We contacted Singapore repair companies. But since the ship is under sanctions, 80 percent of companies refuse to repair it, and those who agree put an unbearable price tag. We tried to bring repairmen from Russia, but the Singapore authorities they did not let them aboard under various pretexts. As a result, a debt formed for the ship’s parking and the authorities seized the ship," Anikin said, without specifying the amount of the debt.
The ship now cannot leave the port, and the company can not buy fuel, he said.
"The crew have provisions, electricity too. The port authorities said that they would take the ship under control and would not let anyone on board or release it. The court is scheduled for December 17. Singapore hopes the court will give it the ship, and then US sanctions will be lifted and it can be sold," Anikin added.
He also said that the company had approached the Russian consulate and was in contact with diplomats.