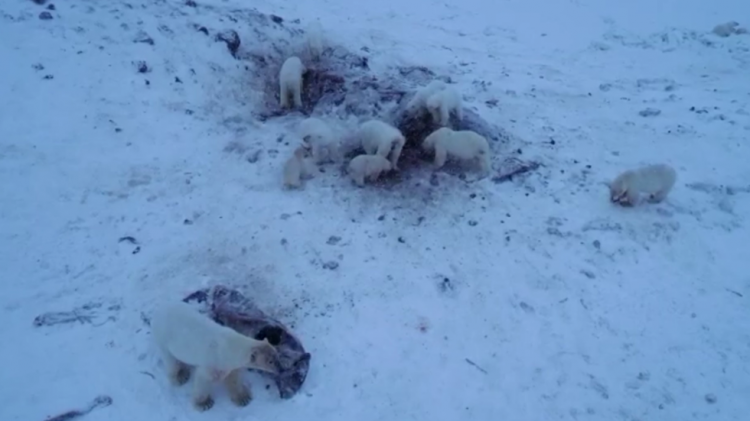 A large horde of polar bears has descended upon a village in Russia's Far North, seeking food. The 'bearpocalypse' has placed the settlement under siege, with authorities and volunteers trying hard to prevent man-bear incidents, Eurasia Diary reports citing Russia Today.

The unusually large polar bear presence is plaguing the village of Ryrkaypiy, located on the snowy shores of the Chuckchi Sea in Russia's northern region of Chukotka. The past few years have been rather quiet in Ryrkaypiy, which is home to some 600 people. Last year, "only" 28 bears showed up. This year, however, the carnivorous horde is huge.

And the bears' numbers are growing. So far, at least 64 individual polar bears have been spotted at Cape Kozhevnikov. A feeding point is being organized for them at the location in an attempt to lure the predators away from the village, according to deputy director of the regional animal protection authority, Egor Vereschagin.

"Signal cartridges and pepper gas have been procured for the 'bear patrol,' which is engaged in scaring the animals away. The weather, however, is preventing all of this being delivered today – there's a strong snowstorm out there," the official told TASS on Monday.

The bear migration has effectively placed Ryrkaypiy under siege – all public events are canceled, while children are allowed to go to school only by bus. The streets are patrolled by 'bear patrol' members and volunteers.

Footage from the scene shows multiple bears strolling in the immediate vicinity of the village, looking for food.

Some of them come very close to people – and such encounters are extremely dangerous. The latest mauling occurred in Ryrkaypiy back in 2011, when a local was killed by a polar bear.

The settlement is no stranger to being a point of interest for the white predators – it's located right beside their migration path. Moreover, it's close to Cape Kozhevnikov – a major hotspot for walruses that gather there during summertime. The bodies of walruses that perished during their stay at the cape are a delicacy for the bears.

This year, the sea is freezing two weeks later than usual. The ice is still unsteady and the bears are unable to move on. It is expected to become solid enough later in December, which will hopefully bring the bear siege of Ryrkaypiy to an end.